One of the things that I love about Borderlands are the pop culture references embedded in the Legendary class weapons. Gearbox has included references from sources as varied as ancient Greek mythology (Atlas weapons) to Scarface and the Talking Heads (Chiquito Amigo repeaters and Dahl Penetrator snipers respectively). It got me wondering about what new kinds of "Pop Legendary" weapons the Borderlands community can come up with....

Post your ideas for "Pop Legendary" weapons here. Don't forget to include the origin of the reference, weapon specifications, and the effect, if any, that the flavor text will have. Be specific as I'm hoping the folks at Gearbox pay attention and might include our ideas in upcoming Borderlands material.

who needs a rocket launcher???

An S&S Munitions double repeater pistol that shoots an explosive round and an incendiary round simultaneously. Fits with the stellar names of the S+S legendaries.

Flavor text: "Feel the power of the Sun!" From God of War 3 when Helios's bitch ass tries to burn you alive with a blast of sun power from his head. (Yoshi-TheOreo)

No reference, this would be similar to the Dahl Jackal but with lower fire rate and the grenades bounce one to several times judging on how many times the damage is multiplied by. This would be useful for bouncing grenades off of walls and hitting enemies behind cover and especially dealing with Crawbastard.

I shoot, you run

this grenade mod would, when pressed the throw button/key, you simply crush it in your hand which lets out a small explosion. this causes you to move faster, regenerate health, and deal more melee damage. (basically Bricks move but with no fists) the duration depends on the level your mod is. Barry Bonds candy for those sports fans out there.

It's gotta be 'roid/baseball references, such as: "What long-term side effects?" "Absolute Anabolic Awesomeness!" "Now I'll get that contract!" "Major League Action." etc - lurker, not a poster

you could try that with a CANDY CRUSH thingy or sommat like dat... just sayin and stuff. HOLY SH*T IM SOOO LATE!!!!- Posted by GeneralRAAM052

Well it does very little damage to enemies, but does pull them towards you slightly(smaller enemies are pulled faster) but it can suck up loot. so if your pinned down in cover with low health and no shields, you can suck up a health item :P this weapon unscoped has a short distance pull but very wide range or when scoped 90 acc and has a far longer reach Roboticsuperman 08:38, April 30, 2010 (UTC)

Can we Fix it?

Either an S&S Munitions shotgun or a combat rifle this gun would work with the other weapons you have equiped mainly elements but also effects so if you have a good set this weapon would be great if you had one for each slot i don't know what would happen.as for the flavor text i thought it fit and would be funny (its from bob the builder) to pair a pretty adult game with a preschoolers cartoon sorry for those that dont get my sense of humor.Aren01 23:28, April 30, 2010 (UTC)

So basically, it merges the effects of your other guns.

PROBLEMS: Combining The Dove with Sledge's Shotgun and then a hell fire. 100 burst no ammo hellfire shotgun. A tad OP. I like the Bob the builder + Borderlands. That could be fun.

Here is a few red text effects I made, but I don´t have any idea for the weapons name (Sorry, I don´t know how to paint them):

See you in hell. Ha!

We're better than you, and we know it!

So this will be a machine gun made by S&S Munitions. it would have a really large clip, like 300.. and decent damage. it could come with a scope or an elemental trigger (probably blast or corrosive,) and it would ricoshet. the fire rate would be like around 8, and the accuracy would be like 91,mabye 92

Any more subordinates for me to kill?

My idea for a new direction for a weapon type in Borderlands would be a non-ranged weapon, namely a Samurai Sword that does 500% melee damage, +200% Critical Hit damage, maybe an improved swipe speed... Needs no ammo. in reference to Kill Bill. Jack Monkey Squat 07:54, May 2, 2010 (UTC)

This S&S Munitions combat rifle would us any ammo availible but switch back to normal rounds once you get more ammo now i couldnt think of a red text related to any pop refrances but i was thinking about "It shoots anything" or some such thing this is mainly for those without ammo regen.

Or how about "Why should I care what you have?" or "What should I use next?"

what about "it shoots everything but the kitchen sink"?

Can't decide on YOUR damage? Have them all!

Basically, this weapon would fire out 1 fast moving glob of mixed colors. It only fires once, then it needs to recharge,but in exchange for the small magazine size, when it hits an enemy, it does Shock, Flame and Corosive damage. The Damage, Accuracy, and Fire Rate levels would very on the cap, and the WP.

This sniper rifle is for the professional snipers only. +1000% Critical Hit Dmg. -50% Non-Crit Dmg. It would have to be in the Pearl catagory, much like the Jakobs Bessie. If the scope is a higher zoom, then the damage and the accuracy go down, but the fire rate would go up, and vice-versa.

Anyone heard of the "Unreal Championship" series? If you play a match and only your team gets points, the spectator will say "Flawless Victory" Mazman1521 01:05, May 16, 2010 (UTC)

Lets have a laser thats fires a harmless laser for 2-5 sec. then a really big laser comes out and obliterates everything in its path Much like the spartan laser from halo. Fires 1 bullet then energy has to recharge has massive damage like 9000-20000 radius with a super slow rate of fire.

Well, for a name, how about something like Torch? And the flavor text could be somehting like "Light the path!".

This class mod is for Roland:

This class mod is for Brick:

+100% weapon damage while down

If you can see it you can kill it

this would be overkill because of all the trolling that a player can do to bosses and all that. you could like be lvl. 38 and defeat Crawbastard and get MEGA LOOT!!!! but yeah there would need to be some type of equalizer like you can stay invinciable for ~insert time limit here~... or better yet the invinciableness could be activated after a big kill streak!!! -posted by GeneralRAAM052

Special ability: Consumes 2 rounds per shot, unloads mag with one pull of the triger.

This would be a beast but would consume your rounds so quickly that you tend to use it only against the strongest of enemies.

Cole blew up the gas station

basicly a DAHL Wildcat in Maliwan form with shock and some explosive? - posted by GeneralRAAM052

A reference to the popular saying, a huge amount of ammo (Think more than the Chopper. Like double or something.) Damage doesn't have to be the best a no scope but recoil is low, and it can spawn with 5x elemental accessories. —Preceding unsigned comment added by 210.87.245.135 (talk • contribs)

An idea me and a friend came up with after playing a couple hours of Fallout 3. The E. Weapon category is basically the alien weapon category, except instead of the weapons being made by the Edarian (or however their name is spelled), they are made by human manufacturers. The alien weapon proficiency becomes the energy weapon proficiency, and both E. weapons and alien weapons are umbrella-ed under it. E. Weapons would function in a similar sense to alien, they have recharging mags, they will either have a larger charge capicity compared too alien weapons, or do more damage.

There is several weapon types: Pistol, shotgun, rifle (both semi & auto), sniper, and a special super energy cannon (think something along the lines of a Spartan laser) The weapon types will be determined by the body & barrel.

Brings to mind the Lancer in DLC3, The Secret Armory of General Knoxx. In Knoxx The Crimson Lance has gotten their hands on Eridian technology. The Lancer utilizes Eridian technology that has been adapted to a Hyperion (?) vehicle and Hyperion makes weapons for The Lance.... Maybe this is material for DLC 4 or BL2: Hyperion energy weapons..... Fryguy42 00:55, May 3, 2010 (UTC)

Actually, Atlas hired Crimson Lance, so it's more likely that Atlas provided weapons and vehicles (Lancers) for Crimson Lance than Hyperion. Also, Atlas was the first company to discover and reverse engineer alien technology and weapons, and there's no info that Hyperion got their hands on alien technology or reverse engineered it. Just sayin' Mr. Zaph 20:27, August 7, 2010 (UTC)

And now a word from our sponsors 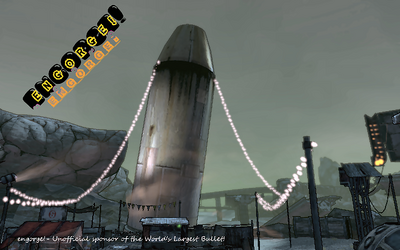