Start a Wiki
Forums: Index > Archives Watercooler > Double Phase Blast
Lilith's skill Phasewalk produces a Phase Blast that can use both the entry and exit blasts within a second to produce damaging and defensive effects by pressing the action skill button twice in quick succession. With the high skill points available now, this tactic can be incorporated into your normal style of play.

The tactic works by causing almost continual elemental damage to close enemies, while you shoot, and gives good defense, all of which works together to hold the trigger longer and kill faster.

The closer you are, the better this works.

A Anarchy user is obviously a choice for this tactic but it also includes a Firefly Mod and many others we can discuss on this page.

The tactic is rather simple: Do a Double Phase Blast every time your cooldown lets you. That is, if you are close to any enemy and you are not in mortal danger. It gives you lots of buffs that are added to normal (shooting the crap out of 'em) play.

The list of useful Class Mods has been given here for easy reference, all information for Class Mods is given here.

Note: Defender, Eridian, and Specter Mods are left out of the chart above, but are refereed to for completeness.

If you don't have the ultimate combination of guns/Mods you want, save any decent Dahl or Maliwan (also Eridian) guns you find, since a Loyalty Mod can work until you do.

The Catalyst Mod is a good generic defensive Mod, useful for cooldown with decent skills. It is better for lower levels until your skills and guns get good enough to chain kill, at which time a +2 rare item find starts losing effectiveness, and shield regen is more desirable.

Mercenary is the best (by far) generic Mod for any SMG, since it can have ammo regen. The skills are also excellent.

Loyalty Mods are by definition limited to manufacturer and, unfortunately, are the only weapon Mods for a non-SMG user.

The best way to incorporate Mods without "kick ass" ammo regen is to sink 5 points into Phoenix for the ammo negation. Couple that with +4 to Phoenix and it becomes more effective. The Specialist (Maliwan), Firefly, and Catalyst Mods (also the Eridian Warrior) can all have +4 to Phoenix.

Mods with Inner Glow and Dramatic Entrance are the only ones that "save" you points, since you only need enough points to be effective in these skills. (Professional (Dahl) and PlagueBearer) (also Defender and Eridian).

Girl Power should be at 4 or 7 points for the "magic" extra percent effectiveness. This can be done with Catalyst and Mercenary Mods to achieve 4 or even 7 points, possibly saving points.

The best Mod to replace Mercenary's ammo regen is the Specialist, with +4 to Phoenix and increased magazine size (AKA the new Merc Mod). The 45% ammo negation from Phoenix is effective mag size and ammo carry capacity. The total of +87% mag size and 2088 ammo for a SMG, switching out to a Merc mod when you need ammo, makes it the best generic elemental Mod.

The Firefly follows the same lines with the +4 to Phoenix, is weaker in mag size but much stronger with (only) fire guns and Phoenix damage. The Maliwan Hellfire and Maliwan Volcano are the preferred weapons, along with any incendiary rocket launchers, machine guns, etc.

Very nice, have you considered filling up the rest of the skill points? Like level up to 69 and get the four skill points from the two playthroughs of Moxxi's and Robolution? I'm most likely going to use this idea for a build when I eventually make a Siren of my own, I see great potential in it, and a lot of work is going into it.

Thanks :), its ALOT of fun. I just gave the minimum points for a healer/blaster build, leaving the rest up to player preference. Although there are suggestions where the points can go (for example: I like enforcer to do more crits with anarchy, but if you use a hellfire, i would say the elemental tree is best). I don't own any pearls as of yet, so I can't limit the build to exclude them :). If you like, leave a link for your style of build, that would be AWESOME. This is my idea of a full Anarchy character, and full Hellfire character.(links fixed) I am the best robot 17:13, January 14, 2011 (UTC)

That link didn't work. Try copy/pasting the link that is in the page text, not the one in the address bar. By the way, I'm most likely going to go more a mix of both enforcer and elemental, or full elemental when I do make my siren.

P.S. Speaking of Anarchies, what do you think of the one I found recently on my soldier? 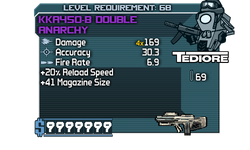 A little off topic, I know, but I just thought I'd get your input since you seem to use them a lot. —Preceding unsigned comment added by Kev-Mas Colcha (talk • contribs)

Fire rate can definitely be improved, and a scope would help.  nagy   talk

Nice damage, but does need the fire rate damage multiplier for DPS. You can up the fire rate with willowtree and still keep it "legit", although, i have no idea what body part or what # to put it at. The Hybrid build you did is rather nice :), also a Maliwan Tsunami with high rate of fire would be good. (my friend showed me his) I am the best robot 06:53, January 15, 2011 (UTC)

body3 or body5. If he wanted to mod it up, he wouldn't need to ask for an opinion. Also, this.  nagy   talk

Torgue is the best manufacturer of Anarchy's, followed by Dahl and then Tediore. But a loyalty mod + style of play is what it is, and brick will take a Tediore any day :) Good thing Lilith can choose any she likes (just like a woman) I am the best robot 00:17, January 16, 2011 (UTC)

She can choose any she likes. However, her only choices are either the dirty hillbilly kid (Scooter), the big scary, and somewhat attractive brute who doesn't really like women anymore (Mr. Shank), or if she swings that way, the damaged goods that could probably be persuaded to swing her way too (Moxxi)... Oh wait, so we weren't talking about that? Darn.

Anyways, yeah, I need to look for a Torgue, and give the Tediore to my Brick.

But could we get back to the original discussion, and move this to either its own page in the watercooler (perhaps a general chat page would be nice?), or our respective user pages? Robot, as you said, you liked my hybrid build. That's good, any suggestions for what gear to use with it?

This is a watercooler forum page so any kind of talk here is ok. But getting on topic, I personally dont use Dramatic Entrence and Girl Power. Mind games works much better than D.E. IMO for stunning enemies with Liliths other skills and abilities and You dont really need Girl Power as Phasewalk is already a get out of jail free card anyway. While your phasewalking and regen. health, your shield is given time to regen on its own. With blackout able to reduce phasewalk cool down to 0.00 seconds you dont need to worry about when you can phasewalk again. So this leaves the skill points for Enforcer and High Velocity. The extra damage boost along with more accurracy and fast fling bullets, help in longer range combat, especially sniping. And as for loadout on Lilith, i like to use a Hellfire, Anarchy, Pest. Stinger/ Tsunami, and leave the 4th for wepons of opportunity, ussually an Orion or Volcano With a Merc. com or Spectre com, both with ammo regen of coarse.Veggienater 04:13, January 16, 2011 (UTC)

Veggienater is totally correct, for a traditional Lilith strategy. This forum is giving both traditional strategy and using phase blasts as a separate strategy for up close fighting. It's executed by putting yourself in the middle of a group and double phase blasting every time you can (while shooting), which uses all the skills as listed. It's a different play style that allows you to do traditional "utilitarian" phase walk healing/transportation whenever you wish. The best gun (as far as i can tell) is a Anarchy, or anything that compares, with a high DPS. The play style overcomes any high DPS gun with low accuracy. In that case, Dramatic Entrance is far more important, since you can stun multiple enemies at once and one point in mind games is fine given the high rate of fire of DPS guns. Girl power and Silent resolve is for damage reduction while Radiance and Phoenix is for more damage, having the traditional "I'm gunna sit here and heal" skills as well. It depends on your play style and if you want to use phase walk as just utility or as both offense and defense. Just thought I would give the alternative that I play :) I am the best robot 10:17, January 16, 2011 (UTC)

P.S. Any good DOT elemental gun with high rate of fire works well, since you can "leave one burning" and phase walk to the next group and almost immediately start double phase blasting. The damage reduction with stuns along with the damaging effects of phoenix/radiance combined with a good Hellfire, etc. is a good group to group killer. I am the best robot 10:42, January 16, 2011 (UTC)

Retrieved from "https://borderlands.fandom.com/wiki/Forum:Double_Phase_Blast?oldid=211628"
Community content is available under CC-BY-SA unless otherwise noted.