Flamerock Refuge is the central town in Tiny Tina's Assault on Dragon Keep.

Flamerock Outskirts is a periphery area at the connection point to Unassuming Docks.

Moxxi's tavern becomes available during the mission A Role-Playing Game. In the tavern, there are two Tina's Lootsplosion slot machines. These slot machines take 2 Eridium per spin, and have instant shock grenades instead of the BOOM TIME!!! grenades in the usual slot machines.

Perception Overlook is an open area outside of town with commanding views out over the nearby cliffs. Davlin is first encountered here at the entrance to The Forest.

Just north of the middle of town is Statistics Shanty, where Sir Reginald Von Bartlesby can be found at a sales stand.

Streetwise Warfs is a clifftop series of buildings and nearby warfs for the town's blimps. There is a Seraph Vendor here. 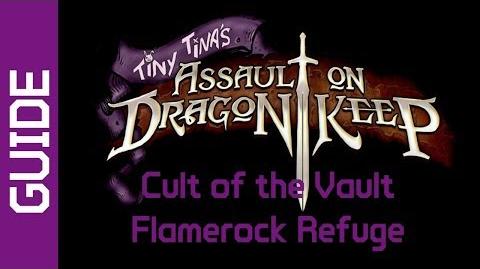