Find Steel opens the final part of the story Borderlands. Commandant Steele has discovered the location of the Vault and has taken the key, along with a large contingent of Crimson Lance, to uncover its riches. The Vault hunters now find themselves in a race to reach Steele before Steele reaches the Vault and to do so they must fight their way through the entire supply chain of Crimson Lance that have preceded before. The race is even more tense as the Lance forces have awoken the mysterious the Vault's enigmatic Guardians standing on his protection from any living beings.

"I know where the Vault is, and so does Steele. She took my Vault Key. You know, the one you worked so hard to get for me? Well, she took it. That albino bitch is going to open the Vault unless you can somehow find her and beat her to it. I'm marking a waypoint at the location of the Vault. I don't have to tell you what to do, do I?" 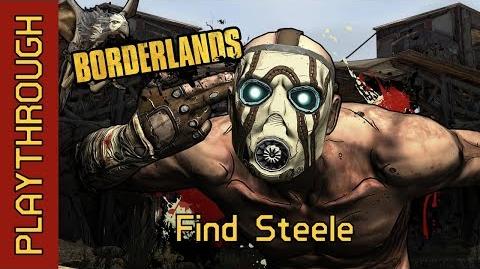 Find Steele and take back the Vault Key.

Find Steele involves a lengthy road trip through various areas where characters are pitted against the Crimson Lance and the Guardians. Recommended weapons against the Crimson Lance are generally long ranged, accurate, and do corrosive damage. The Guardians are best approached with shock damage attacks, and the optimal weapon types extend to all types depending on the terrain and types of Guardians encountered.

Mordecai's Trespass skill is highly effective against the Guardians in this mission, as they have very strong shields but very low health. The other characters will do well with either shock or corrosive Artifacts equipped for their Action Skills to complement their weapon damage. Frequent switching of the equipped Artifact between Corrosive and Shock is a common tactic when encountering both Crimson Lance and Guardian enemies together.

After the ECHOnet is restored, head out to the Crimson Enclave and use the Fast Travel to return to the Salt Flats and grab a Runner to reach the next waypoint. The final approach to the waypoint must be completed on foot and is guarded by the Crimson Lance who have established a base camp for others of their brigade already on the march to the Vault. Much of their encampment can be avoided by heading directly to the transition marked by the waypoint. A narrow path runs down to the transition below the cliff edge and if the waypoint is approached directly characters can simply drop off the edge and onto it before ducking through to The Descent.

The Descent is a linear area filled with many Crimson Lance and Guardians. The first encounter is against several Guardians and the initial staging area is a good place to get characters set up for Shock damage attacks. Sera Guardians present fast moving targets that can be difficult to track. Depending on where they fly some can even be ignored as players progress deeper into the Descent.

The second stage has players exiting a tunnel overlooking a huge chamber that has turned into a battleground between the Crimson Lance and the Guardians. Highly accurate, long ranged weapons can be used to great effect to dispatch Sera Guardians drifting above the battle. The combatants below can be pummeled with whatever weapons the Vault hunters have equipped. Raining area effect blasts down on the heads of the combatant below can offer a method of participating in the fight while keeping characters fairly safe from return fire.

The Eridian Promontory begins with some conveniently positioned vending machines right at the start of the area. The vendors are the last of such machines encountered in the game. The Guardians in this area are often encountered in surprise ambush positions where they suddenly materialise and attack. For this reason it is often best to have Shock damage attacks ready for use if there are no Crimson Lance around, because a fight against the Guardians could erupt at any moment. The Crimson Lance, on the other hand, will be encountered in concealed positions and already in combat against the Guardians. Approaching them may spark surprise Guardian attacks.

There are many sheer drops off the sides of the Eridian Promontory. Under normal conditions, backing away from opponents that are charging into melee range is a common tactic, however in this area a misstep can spell the instant demise of a character. In many cases it is often better to turn and run, rather than continue a retreating fight. Some ledges just below the level of the paths here are deceptive in that they look easy to step on to retrieve drops, however stepping out onto them can spell the instant demise of a character. Guardians can fall off themselves, and survive, so it is not unusual to see a red blip on the radar belonging to an unreachable enemy.

At the end of the Eridian Promontory lies an open area, with the transition to the Vault at the back. It is highly recommended that all characters present are healed up and have full ammunition stocks before passing through the final door.

"You've fallen into an ambush set by the Crimson Lance. Steele anticipated your pursuit and took measures to ensure you couldn't interfere."