Fake Geek Guy is an optional mission in Tiny Tina's Assault on Dragon Keep. Due to Mr. Torgue's commanding of the Vault Hunters to detonate most of the Flamerock Refuge airships, he has been sent to the stocks and is facing banishment from the game, unless the Vault Hunters can help him answer three questions to prove Torgue's affiliation with all things geek.

The first scroll is on an isolated spire of rock a short distance from Flamerock Refuge. To reach it requires using an airship to cross the gap, and this will spontaneously appear when the airship dock is approached at Perception Overlook. The airship performs a circuit of the spire and slows down at the docks so that the gap can be jumped, thus providing a means of accessing that natural pillar. Several pairs of skeletons can also be found on the spire, with archers guarding the docks and others ambushing from beneath the earth on the island itself. An incendiary barrel near some of the archers can help make short work of them, sometimes by blasting them off the dock entirely.

The second scroll is in the hands of a scroll thief. He runs a circuit of the town and must be hit with melee strikes three time before he will stop. He is also a very fast runner, so a practical solution is to simply observe his path and wait for him to run within range. He can be body blocked, which makes him even easier to stop and hit. Any Vault Hunter, or Sabre Turret, can block him, and several lined up in a row can form a wall that will stop him in his tracks.

The final scroll is in the hand of a skeleton suspended in a gibbet off some docks at Streetwise Warfs. A valve handle cranks the gibbet up to within reaching distance so that the third scroll can be retrieved. 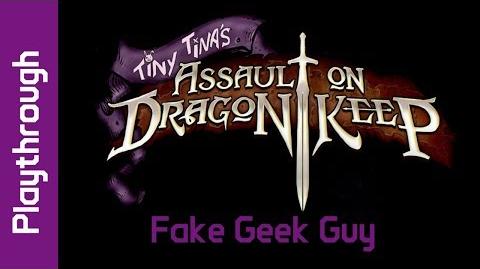