FL4K is the playable Beastmaster class in Borderlands 3.

According to an ECHO log found aboard Sanctuary III, FL4K served as an "Indexing Unit" under the command of a man known as the "Grand Archivist", sometime before the events of Borderlands 3. Their employment was cut short when FL4K suddenly acquired self-awareness and a "thirst for murder," as FL4K puts it. At this time, it is unknown what brought about this sudden change in FL4K, or which archives FL4K and their master were responsible for.

After gaining self-awareness, FL4K now roams from world to world seeking self-discovery. While they feel a connection with the primal wisdom of animals (and thus always have a pet companion with them), the social constructs of humans are strange to them. FL4K has an unending goal to chase "The Hunt", an apparent belief of hunting as a way of life; they pursue The Hunt in an attempt to please "Mistress Death", a personification of death itself.

FL4K cloaks, turning invisible, and can fire three shots while cloaked. Each shot is registered as a critical hit. While cloaked, FL4K gains increased movement speed and health regeneration.

FL4K creates a rift at a target location, teleporting their pet through the rift and doing radiation damage to nearby enemies. Additionally, FL4K's pet becomes irradiated, growing in size and dealing bonus radiation damage when it attacks.

Using Gamma Burst while FL4K's pet is downed or dead will revive the pet at the targeted location with 30% of its health, but will double Gamma Burst's cooldown time.

FL4K tosses out a snare that knocks up and temporarily stuns nearby enemies. After being deployed, the snare periodically continues to knock up and stun enemies for the duration. While standing near the snare, pressing E will pick up the snare, ending the action skill early and refunding the portion of the remaining duration.

Once summoned, FL4K's selected pet will follow FL4K wherever they go, automatically fighting any enemies they encounter. This will continue until the death of said pet. In this case, a cooldown period will begin, at the end of which the selected pet will respawn automatically to join FL4K once again. Each Pet is tied to one of FL4K's skill trees. As skill points are put into these trees, new evolutionary forms will be unlocked for the associated pet, changing their stats, appearance, and the effects of FL4K's attack command. The pets will also give ammunition, and on rare occasions weapons and will sniff out chests prompting FL4K to give the player a verbal command. In addition to their given pets, FL4K can gain the ability to turn enemies into Pets temporarily using the "Dominance" skill of the "Master" skill tree. If this ability is used on a beast, the duration of the effect will be doubled.

FL4K is joined by a Jabber Sidekick that is armed with a pistol. While accompanied by the jabber, FL4K's movement speed is increased.

Holding the Action Skill key issues an attack command where the jabber throws a radiation barrel at enemies.

FL4K is joined by a Spiderant Centurion companion that imparts FL4K with health regeneration.

The Spiderant will occasionally produce ammo. (Fl4k will say things like "When did you eat that?" and 'Where were you keeping that?")

Holding the Action Skill key issues an attack command where the spiderant charges into enemies.

FL4K is joined by a Guard Skag companion that increases FL4K's damage while it is with them.

Holding the Action Skill key issues an attack command where the skag vomits acid onto enemies.

FL4K is joined by a loyal mini ION Loader Bot companion, armed with a Shock Sniper Rifle. While the ION Loader is selected, FL4K gains increased resistance to all elemental damage.

The ION Loader will also create Homing Shock Orbs that can be shot to trigger a Shock Nova.

Issuing an attack command will cause the ION Loader to attack the target with an eye laser. 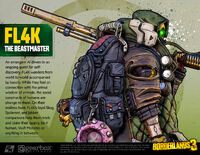 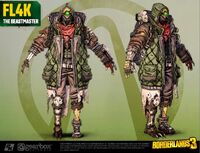 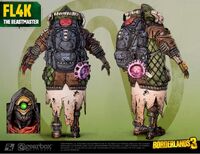 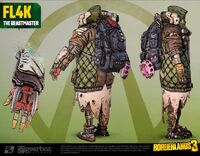 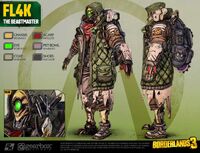 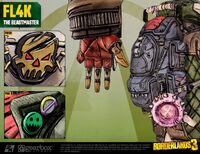 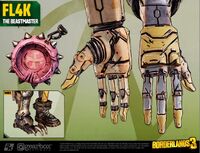 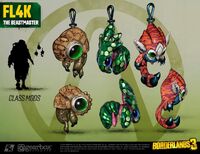