Eye to Eye is the eleventh story mission in Borderlands: The Pre-Sequel.

The first part is to disable the three power sources scattered around the map. Shooting at the white-lit pipe will cause the source to be disabled normally and the red ones trigger a devastating explosion that damages everything nearby. The last two power sources are guarded by Lost Legion soldiers and power suits, so the Vault Hunter must defeat them, so as not to get damaged when they are attempting to destroy the power sources.

With these sources gone, the main console has to be activated to drain the force field's remaining power. The process is automatic once started and will continue for several minutes. Zarpedon will summon a Lost Legion onslaught, though they are mostly common enemies with a small chance of a Badass appearing. The objective is to prevent Lost Legion Marines (not including powersuits) from reaching the console and suspending the drain. Note that only one soldier may be able to operate the console at a time and during this process, they are not offensive, allowing them to be easily defeated. The attacks will continue until the force field is destroyed, revealing the passage to the Eye of Helios.

Jack guides the Vault Hunter through the laser death trap of the area, with vending machines providing a resupply before the upcoming fight. Reaching the top results in a cut-scene where Zarpedon's suit and Lost Legion soldiers are dropped, after which the boss fight begins.

Zarpedon's suit is an armored target protected by a weak shield, thus good corrosive and shock weapons are a must. The critical hit location is the cockpit located in front. The mech has several attacks, namely by firing shock orbs, ramming the Vault Hunter, and slashing with a shock sword. Occasionally, if her shield is not full, Zarpedon will insert her sword into the exposed pipelines (these areas damage the Vault Hunter with electricity upon contact, forcing them to step away) on the floor and regain shield energy until reaching max capacity or after a few seconds of charging, should she fail to refill her shield. When charging, the suit does not move and is open to attacks. Most of the fight consists of the Vault Hunter dealing corrosive attacks at the mech suit while utilizing the weaker Lost Legion troopers for second winds. Jack will also use his incendiary lasers and shock blasters to damage nearby enemies and draw fire from them. As he cannot be killed, the Vault Hunter can utilize this to their advantage. The explosive energy charges return in larger but fewer clusters, and generally are not helpful to the fight, thus the characters must avoid them. When Zarpedon's suit is destroyed, it will collapse and drop loot.

Less than a minute after the suit is destroyed, Zarpedon is revealed to be alive and well, before emerging from the wrecked suit and engaging the Vault Hunter in combat. Zarpedon herself has more devastating attacks. This includes a highly-damaging shockwave, a cluster of slag daggers, and melee attacks. Zarpedon is not an easy foe, though as with the suit, most of the damage goes to her high health and being a flesh-based enemy, good incendiary weapons or the E-GUN are highly advantageous. Zarpedon's head, which is her critical hit location, is relatively easy to hit and Beam lasers are at their best against her. The shield will recharge like the Vault Hunter's own - after not taking damage for a period, but much longer than Vault Hunter's shields. The overall strategy remains the same - deplete her shield quickly, then dish out as much damage as possible. When Zarpedon is defeated, a cut-scene shows Jack finally finishing her off for good.

After the battle, the Hyperion Contingency Armory offers loot. Note that some of the chests don't spawn until the Vault Hunter gets close enough. There are 4 red chests and at least 5 yellow chests, along with the scattered ammo crates & miscellaneous loot-able objects.

Disabling the laser includes a few more steps. After Moxxi's instructions, the Vault Hunter has to inject slag into the Eye of the Destroyer. A singularity effect is created when two injections have been made but this stops after the third injection. The Vault Hunter can then leave via the Fast Travel to Lunar Launching Station.

The attempt to shut down the Eye of Helios is successful, but this results in the eye exploding and destroying itself. Afterwards, the mission can be turned in to Jack.

Remotely shut down the Eye of Helios.

"Stuff just got real. Like, even more real that it had been previously. Dang." 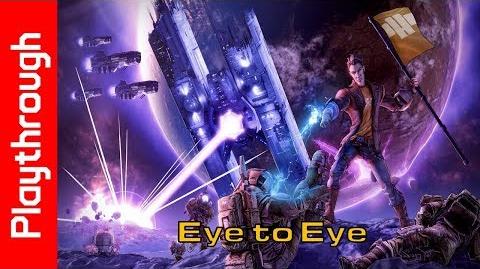 Eye to Eye
Retrieved from "https://borderlands.fandom.com/wiki/Eye_to_Eye?oldid=472990"
Community content is available under CC-BY-SA unless otherwise noted.