The Descent
The Vault

The Eridian Promontory is a hidden pathway in an alpine region of Pandora. Guardians lie in wait throughout the area to prevent trespassers from reaching what lies beyond.

At some point in the distant past, during the Eridian presence on Pandora, the Eridians used a series of natural cliff-side walkways to form the only overland approach to a hidden Vault. In the demise of their civilisation, they resorted to leaving their Guardians behind as insurance that nobody would ever open the Vault.

Commandant Steele has taken the Vault key and led her forces to this inhospitable place. Forcing their way through the area, they have encountered a strong resistance from a number of Guardians and the resulting conflict has resulted in bodies piling up on both sides. The pursuit of Steele brings the main characters into this fray and has them battling against both the Crimson Lance and the Guardians as they struggle up the slopes to intercept Steele before she opens the Vault. 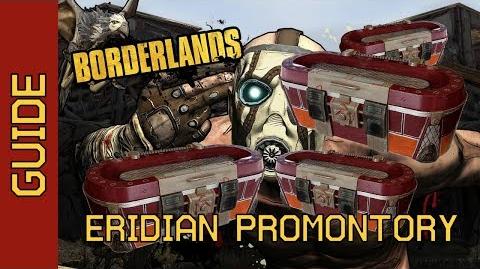 Ingame map of location
Retrieved from "https://borderlands.fandom.com/wiki/Eridian_Promontory?oldid=430266"
Community content is available under CC-BY-SA unless otherwise noted.