Optional mission
Eradicate! is a side mission in Borderlands: The Pre-Sequel. It is collected from the bounty board in Jack's Office after completing the Quarantine tree of missions, including the missions from Lazlo.

The First objective to report to the Veins of Helios requires moving to the mission marker at Central Maintenance. This can be achieved from either direction, approaching from Hyperion Hub of Heroism, or from the Lunar Launching Station.

There are then three robot parts to collect: a laser drill, a cranial interface, and a sensor array. They are scattered around the Veins of Helios and require the use of jump pads to reach. The laser drill is fairly intuitive to find, being accessed by a conventional jump. The cranial interface is hidden high in a room with an open hole in the floor. This is accessed via a jump pad beneath it that looks like it points well out to the side of the open area, but actually shoots a person up almost vertically into the room above. The sensor array is on top of the Communication Platform, which can be accessed via a series of jumps, or directly from a jump pad below the connection to the Lunar Launching Station. If this jump pad is used, the trajectory of the Vault Hunter must be interrupted by a mid-flight boosted jump to steer further left in order to land on the wide support connecting to the Communication Platform.

The rest of the mission takes place in the Central Maintenance, populated by various Infected and the Lost Legion.

The next step is to scan the parts into a machine. This summons CL4P-L3K, Tassiter's armed prototype robot. Unable to distinguish friend from foe, it promptly attacks, yet must be led safely through the complex to Eghood's room. CL4P-L3K uses shock attacks that quickly deplete shields, and this poses a threat by leaving Vault Hunters vulnerable to follow-up attacks, and to attacks from the Infected. CL4P-L3K's attacks can be avoided by running ahead as CL4P-L3K will start targeting any Infected between it and the Vault Hunter.

Eghood resides in a deep room with an overlooking stairway and catwalks around the periphery. This makes him vulnerable to attack while keeping Vault Hunters relatively safe above, although other Infected will periodically enter the fray, attacking both the Vault Hunters and CL4P-L3K alike. Eghood can be killed without CL4P-L3K scoring the kill, although this forfeits the bonus objective for the mission. It is therefore more rewarding to whittle down his shields and health, and let CL4P-L3K score the kill.

With Eghood dead, CL4P-L3K will begin yelling about eradicating everything. This prompts Tassiter to request that the robot be sealed in the room so it can be retrieved later, but there is an alternative option of simply destroying CL4P-L3K instead. There is a console just outside the room that will seal the door on CL4P-L3K, which will close the door once every participating Vault Hunter is out.

Sealing the door sets the mission reward as the Globber, while destroying the robot yields the Systems Purge for the reward.

"Here's your reward. Choke on it." 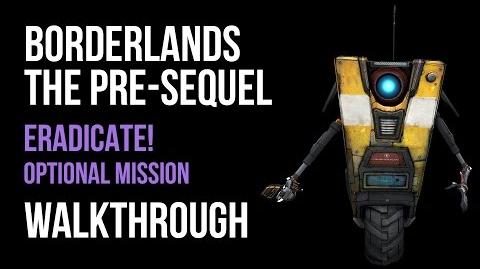 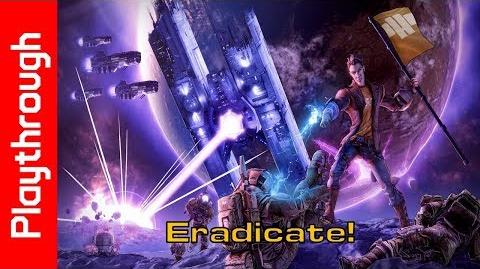 Eradicate!
Retrieved from "https://borderlands.fandom.com/wiki/Eradicate!?oldid=474542"
Community content is available under CC-BY-SA unless otherwise noted.