Enter the Claptrap is a main storyline mission in the Claptastic Voyage DLC from Borderlands: The Pre-Sequel.

This mission is given to the Vault Hunters automatically upon visiting Deck 13 1/2 for the first time. The Vault Hunters meet Handsome Jack there and discover that Jack is after a data package called the "H-Source," which has been hidden inside Claptrap's mind by Harold Tassiter. The H-Source is rumored to contain top-secret Hyperion research and technology, and Jack believes it will bring him great power.

"You've been digitized and sent into a simulation of Claptrap's mind to look for a file that Jack wants. Just another job." 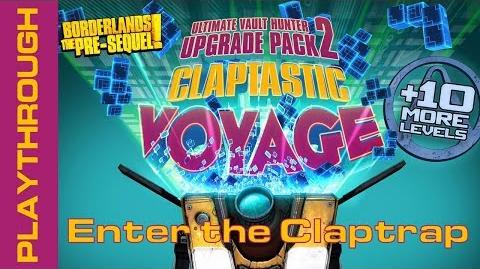 Enter the Claptrap
Retrieved from "https://borderlands.fandom.com/wiki/Enter_the_Claptrap?oldid=433105"
Community content is available under CC-BY-SA unless otherwise noted.