For other uses, see Engineer.

The Engineer is Hyperion's front line human troop unit in Borderlands 2. They are common in the city of Opportunity, apparently being involved with the construction work there, and are also deployed in various Hyperion installations.

Engineers are equipped with heavy-duty construction equipment that they frequently use as weapons when the need arises. With the powerful robotic exoskeleton they wear, engineers use it to deliver blows or to tear up and throw pieces of ground. At moderately close ranges, engineers will activate a cutting laser or deploy small destructive charges from emitters protruding from their backpacks. To close the distance to their target, they have a powered leap that can launch them incredible distances.

As engineers are treated as an armored enemy, corrosive weapons are recommended.

Like most other human enemies, their critical hit location is their head. However, it is protected by a welder's mask helmet that must be shot off before critical hits can be scored on them. This only applies to common engineers as boss variants cannot have their helmet be shot off. 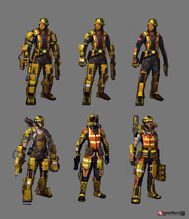 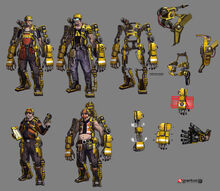 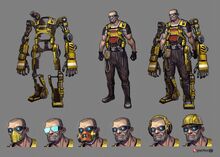