This article is about the biker enemy in Mr. Torgue's Campaign of Carnage. For other uses, see Enforcer.

Enforcers are biker enemies that appear in Mr. Torgue's Campaign of Carnage. They are muscle-bound brutes with grossly oversized chests and biceps. They typically wear a singlet and many are able to fight with two guns simultaneously. 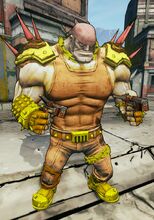 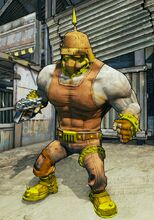 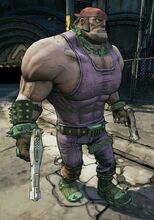 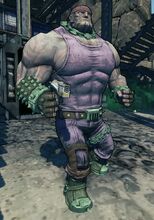 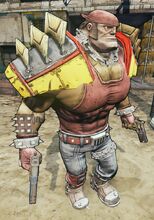 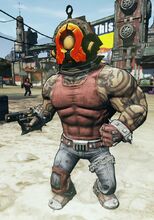 Enforcers operate similarly to goliaths, moving slowly around the field of battle, not bothering to take cover, and generally unleashing a high rate of fire with their dual wielded guns. They will also occasionally break into a flat out sprint, often when receiving a significant amount of damage in a short amount of time, to close the distance with their targets, where they will initiate a jumping stomp attack that can knock victims away. Enforcers have no limit to the distance that they can jump and can sometimes be seen making incredible vertical leaps to reach a target on a higher elevation. In a way, they are basically goliaths who can liberally switch from Normal to Raging and vice versa, depending on the situation, gunning their opponents down while strafing at a slow pace, or putting aside their guns and charging at their aggressors with powerful punches and back again.

Badass Enforcers carry only one gun, but are much tougher to kill than their regular counterparts.