Enchanted Skeletons are enemies encountered in TK Baha's Bloody Harvest. They are recognizable by their distinctive blue crystal bones.

Enchanted Skeletons are formidable opponents. In their right hand they wield a long bone with a skull attached to its top end, which they use as a club. They shoot balls of electricity from their left hand which can swiftly deplete shields.

They have three forms of attack: balls of electricity from their left hand when at long to medium range, bone clubs at melee range, and shock novas when at melee to medium range.

They rush at their intended victims seeking no cover but will occasionally combat roll their way out of the line of fire. They deliver two blows with their clubs when they reach melee range which is followed by rising the club up in the air. Skull at the end of the club starts to glow until up to 3 shock novas are released in quick succession. These novas are strong enough to completely destroy even best of the shields and take large portion of health. If they manage to get their target cornered, Enchanted Skeletons will keep delivering blows with their clubs and releasing shock novas.

They are almost completely immune to shock and incendiary but vulnerable to corrosive and explosive damage. 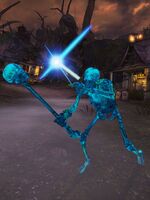 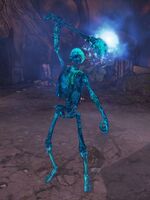 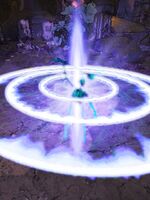 Retrieved from "https://borderlands.fandom.com/wiki/Enchanted_Skeleton?oldid=417712"
Community content is available under CC-BY-SA unless otherwise noted.