Ellie is an NPC introduced in Borderlands 2. She is Mad Moxxi's daughter and Scooter's sister, and is the mechanic that introduces the Bandit Technical.

Ellie and her family were part of the Hodunk clan, until the Hodunks decided to make her the clan-wife. Disgusted, Moxxi killed the clan leader at the time and took both her children with her, eventually ending up in Sanctuary.

Ellie became so fed up with Moxxi's insistence that she slim down her physique that she left Sanctuary and moved into The Dust, worrying her mother with the fact that she intentionally puts herself in the middle of the ongoing clan war between the Hodunks and the Zafords.

When the Vault Hunters have need of a bandit vehicle to get past the Bloodshot gang, they are directed to Ellie. Unfortunately, the Bandit Technical she had was crushed shortly before the Vault Hunters' arrival, so she sets a task of collecting various car parts to complete another.

She is later involved in a series of missions to reignite a feud between the Hodunks and the Zafords. At her urging, the Vault Hunters strike a few minor targets on each side, setting up an escalating cycle of violence until both clans are all but decimated.

During the Commander Lilith & the Fight for Sanctuary side mission Space Cowboy, she is given ownership of the Catch-A-Ride system through her late brother's last wishes, and helps the Vault Hunters erect a memorial in the Dahl Abandon for Scooter.

When hit by a car

During an active mission

During an active mission

Commander Lilith & the Fight for Sanctuary

While idle
Some of the idle chats are mission related and can't be heard again once the mission in question is completed. 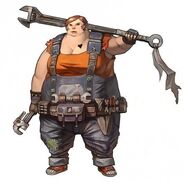 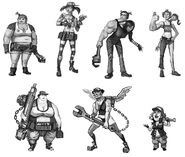 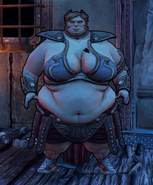