Ell in Shining Armor is an optional mission in Tiny Tina's Assault on Dragon Keep.

Ellie needs a wardrobe update, something "to protect her beautiful girth." She knows of a location in the Forest where the local militia used to run a forge before the sorcerer turned them all into skeletons.

The objectives of the mission are all at Old Glenn the Blacksmith's Cottage, which is also the location of the "Explore the side path" optional objective of Denial, Anger, Initiative, and a plate of crumpets for Post-Crumpocalyptic. The area is occupied by treants, although these slow creatures can be dealt a decisive blow with a few incendiary attacks to remove their threat.

The first objective is to shake a tree which then drops a metal brassiere to the ground. Ellie wants a bit more coverage however, and the search moves to a crate next to the cottage. Opening the crate reveals something bulkier and more protective, which leads to the final decision of which one to retrieve.

"Sticks and stone may break her bones, but orcs will never hurt her." 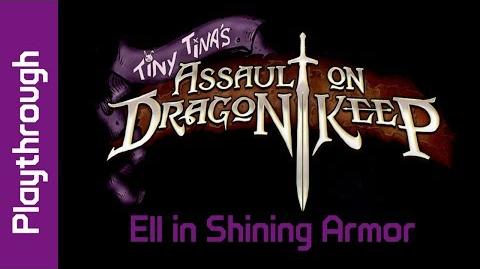 Ell in Shining Armor
Retrieved from "https://borderlands.fandom.com/wiki/Ell_in_Shining_Armor?oldid=472871"
Community content is available under CC-BY-SA unless otherwise noted.