Jump on all 5 couches in the Bloodshot Stronghold.

Eff Yo' Couch is a challenge to locate and jump on couches in the Bloodshot Stronghold.

Couch 1: In the room after the first flooded room on the left hand side.

Couch 2: In the large room before Satan's Suckhole, on the upper ledge closest to the door leading to the entrance.

Couch 3: Located in a flooded room after the whirlpool room. Look under the second level on the dry floor across the flooded shed.

Couch 4: After entering the narrow tunnels, go up the stairs and look in the first room to the right.

Couch 5: Located In the room after fighting the splinter group. 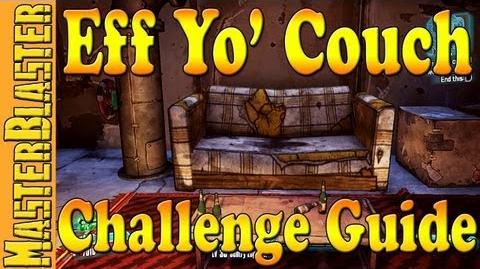 Retrieved from "https://borderlands.fandom.com/wiki/Eff_Yo%27_Couch?oldid=416857"
Community content is available under CC-BY-SA unless otherwise noted.