Earl Needs Food...Badly is one of four optional missions with events in Krom's Canyon. Crazy Earl needs food and his favorite food is canned skag meat.

"Hey, if you've got nothing better to do with your time, you can go get me some dinner. I'm talkin' about the best food on Pandora, canned skag meat! Only problem is, Krom likes it, too, and he hijacked my entire supply! Make yourself useful! Go on out to Krom's Canyon and hijack it back." 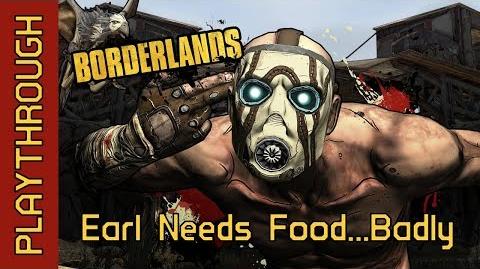 Cans of skag meat are scattered throughout the right-hand branch of Krom's Canyon. Waypoint markers denote the locations of the cans, and once all ten have been collected, the mission can be turned in to Earl.

Collect cans of skag meat from Krom's Canyon, then return to Earl.

Cans of skag meat are scattered throughout the right-hand branch of Krom's Canyon. They are marked on the attached map with green dots.

The skag meat is all located in right-hand branch of the canyon. The first can is past two nests of spiderants at the base of a ramp with a New-U Station respawn point. The second is up on the plateau beyond. The third is beyond the ramp to the right, before crossing over to the next plateau. There, near a broken Claptrap, is the fourth can. The fifth and six cans are located on either side of the nearby bridge. There is a tower to the left after the bridge that requires a leap off the cliff and onto the tower to reach the seventh can. Reaver's encampment contains the final three cans, two cans on boxes and one in front of a dumpster.

"With an almost feral look in his eye, Earl snatches the cans of food. He wrestles one of them open, grabs a spoon, and begins eating the contents cold. It's obvious that he's forgotten you were ever here."