Earl's Scrapyard, or Crazy Earl's Scrapyard is a vast junkyard comprised of rock, buildings constructed from scrap metal and immense piles of trash. The bleak landscape is inhabited by multiple varieties of skags, spiderants and bandits, and plays home to multiple side missions given by Crazy Earl. The transition can be found in the South-West of The Rust Commons West. Earl himself resides in a hovel found near the entrance to the outpost, a short distance south-east from the vending machines. No Catch-A-Ride terminals are found in the Scrapyard, therefore vehicles are out of the question here. Skags re-spawn near the transition, but they and the spiderants can be sprinted past with little damage. They'll rarely enter the area where Crazy Earl lives. 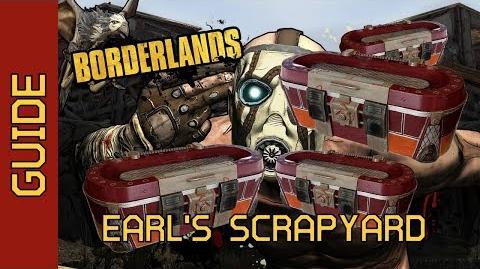 Retrieved from "https://borderlands.fandom.com/wiki/Earl%27s_Scrapyard?oldid=430256"
Community content is available under CC-BY-SA unless otherwise noted.