Earl's Best Friend is an optional mission in Borderlands given by Crazy Earl. It becomes available after Jaynistown: Cleaning Up Your Mess is complete.

"My best friend! The bandits took 'im out to the Trash Coast! You gotta save 'im! I'll do anything, just don't let them kill 'im!" 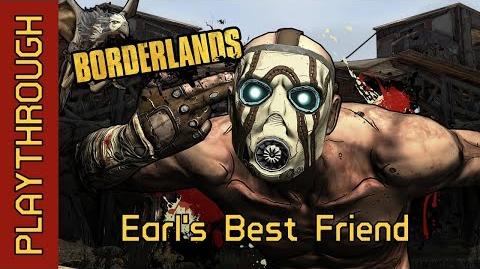 Rescue Earl's best friend, held by the bandits on the Trash Coast.

There are several minor bandits to deal with on the approach to the animal pen, although these will not present much obstacle. Head to the release switch on the skag cage to free Skrappy. Once freed, Skrappy will run to a small darkened tunnel opening and disappear inside. Return to Earl for the reward.

"Skrappy! You came home! Who's a good boy? Skrappy's a good boy! Did those mean bandits scare you? Thanks for setting him free. He's really a lap skag, and those bandits wouldn't even know how to clean up his little Skrappy-doos. Would they. No, they wouldn't!"