END OF LINE is a main storyline mission in Borderlands: The Pre-Sequel 's DLC Claptastic Voyage.

Just as the Vault Hunters reach to take the H-Source from 5H4D0W-TP at the close of the previous mission, 5H4D0W-TP reveals that he has no intention of actually handing the H-Source over, intending to keep it for himself and burrow deeper into Claptrap's mind. The Vault Hunters give chase and find themselves in Claptrap's Subconscious, a strange and fragmented area with floating platforms, corrupted areas, and Claptrap's memories strewn about haphazardly.

Chasing 5H4D0W-TP further into the area, the Vault Hunters are eventually blocked by a Deletion Field, and Claptrap's Consciousness says that he will be able to get through if the Vault Hunters rescue his Hope and Self Esteem, which are being held captive nearby. On their way, the Vault Hunters begin to encounter resistance from Insecurity units, backed with Clapdogs as usual.

The Vault Hunters eventually discover an arena-like area which has a gigantic bobblehead version of Handsome Jack, who informs the party that he has corrupted Hope and Self-Loathing into "better" versions called Despair and Self-Loathing. Once these giant Clapdogs are defeated, though, they revert back to Hope and Self-Esteem, and when brought back to Claptrap's Consciousness are able to defeat the Deletion Field blocking progress.

Once through the field, though, it is revealed that Claptrap's Consciousness was actually 5H4D0W-TP in disguise, who tricked the Vault Hunters into rescuing Hope and Self Esteem so that he could become more powerful himself, and burrow even deeper into Claptrap's mind. The Vault Hunters jump down a pit to chase after 5H4D0W-TP and lose ECHO contact with Jack, finding themselves in the Sub-Subconscious area.

The Sub-Subconscious area is strongly influenced by M. C. Escher, and features many "sideways" and "upside down" rooms, as well as some optical illusions to make the rooms look different than they are. Throughout the Sub-Subconscious, the Vault Hunters will defend themselves against Glitches, Viruses, and Bugs controlled by 5H4D0W-TP.

Eventually the Vault Hunters chase 5H4D0W-TP to The Cortex, where they must fend off two waves of software enemies, also controlled by 5H4D0W-TP, including Software B4nD1Ts. After the second wave, 5H4D0W-TP himself attacks the vault hunters, aided by Hope and Self Esteem.

Once 5H4D0W-TP is defeated, the Vault Hunters can make their way up to a control room where the H-Source can finally be found. They pick it up, and a gateway back to Deck 13.5 opens up. Traveling there, they hand the H-Source back to Jack, thinking that their quest is complete.

"You've survived the depths of Claptrap's psyche and returned triumphantly with the H-Source to Jack. Nice work." 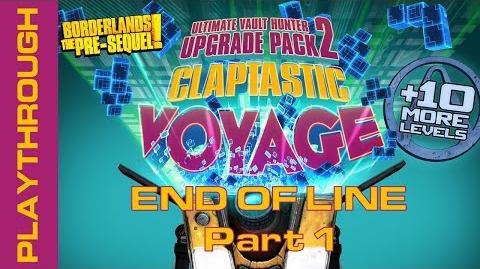 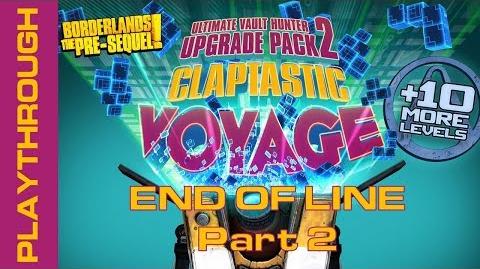 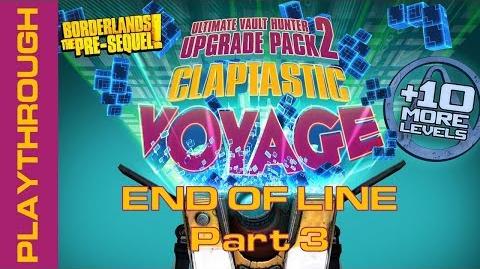 END OF LINE - Part 3
Retrieved from "https://borderlands.fandom.com/wiki/END_OF_LINE?oldid=416400"
Community content is available under CC-BY-SA unless otherwise noted.