E-tech weapons, or Eridium technology weapons, are type of experimental weapon featured in Borderlands 2. Non-Unique E-tech weapons are color-rated magenta, similar in hue to purple rarity, befitting their high quality. They rarely drop from enemies and loot, but can be commonly found in the Sanctuary Golden Chest. They will always have their manufacturer's highest-quality (purple) skin.

E-tech weapons are currently manufactured by all manufacturers but Jakobs, as their weaponry almost never uses an element. Only two Torgue E-tech weapons exist, the SWORDSPLOSION!!! shotgun, which can only be found in the Tiny Tina's Assault on Dragon Keep DLC, and the Effervescent Unicornsplosion, found in the Commander Lilith & the Fight for Sanctuary DLC.

The component that determines whether a weapon is E-tech is the barrel. E-tech weapons have special barrels with attached hexagonal stabilizers with glowing interiors, which gradually spread open as they fire. They usually use multiple rounds of ammunition per shot (notable exceptions include Longbow and Topneaa). They have low projectile velocity and cannot score critical hits, but have high damage and elemental effect chance.

E-tech weapons are introduced in Dr. Zed's mission Medical Mystery, where the Vault Hunters are asked to investigate Doc Mercy and the mysterious weapon he's been using (a BlASSter). The follow-up mission, Medical Mystery: X-Com-municate, has the Vault Hunters test out the weapon on the local Bandits. During the mission, Dr. Zed gives additional information about how E-tech weapons are manufactured. Following this, Dr. Zed takes the weapon, but gives a Spiker or Dart as a reward. In the mission, The Lost Treasure, the reward is a Unique E-tech Dart pistol known as the Dahlminator.

The two E-tech pistol types are Spiker and Dart. The Dahlminator and Wanderlust are both Darts, while Logan's Gun is a Vision, mechanically similar to a Spiker but not classified as E-tech.

These pistols shoot projectiles that are slow-moving, stick to enemies, and explode after a delay; there is no immediate feedback regarding whether a shot has hit, since the damage number only pops up when the round explodes. An important note is that their high damage statistics are offset by the fact that neither type of weapon is able to cause critical hits. Also of note is that these guns will ignore the shield carried by some nomads, making incendiary darts and spikers, as well as slag ones, more powerful than the others.

Dart - Shoots projectiles that ricochet off surfaces but stick to enemies. Projectiles will "home in" on targets, either when aimed at in the crosshairs or failing that if the projectile travels within a certain range of a live enemy.

Spiker - Shoots projectiles that stick to enemies and surfaces. Fire rate is higher compared to those of Darts and projectiles are not homing. The Spiker's brand-specific weapon bonuses are the same as the Dart's weapon bonuses, as stated above.

E-tech submachine guns are called Plasma Casters. They have a special barrel with three muzzles and a flamethrower-like ignition underneath, and fire slow-moving energy balls. Projectile behavior is highly dependent on the manufacturer.

Furthermore, another Unique E-tech Plasma Caster was introduced in Tiny Tina's Assault on Dragon Keep: The Florentine, a Seraph submachine gun. The Florentine has all the attributes of a normal Maliwan Plasma Caster, but deals both slag and shock elemental damage. It is also the only E-tech weapon that utilizes two elements at once.

E-tech shotguns are called Splatguns or Splasher Blashters. The trajectory of the projectiles are affected by gravity, limiting their effective range. Most E-tech shotguns consume 2 ammo per shot.

In Captain Scarlett and Her Pirate's Booty, an E-tech Seraph shotgun can be found, the Retcher. The Retcher fires arcing corrosive projectiles and only consumes 1 ammo per shot for an E-tech weapon with slow reload. In Mr. Torgue's Campaign of Carnage, the final two bosses can drop the Slow Hand. The Slow Hand has a 3.5% transfusion healing effect and fired projectiles are not affected by gravity.

In Tiny Tina's Assault on Dragon Keep, the SWORDSPLOSION!!! is rewarded for completing the mission The Sword in The Stoner. This Unique E-tech weapon fires a single projectile in the shape of a sword which explodes upon impact, launching three smaller swords at an angle, which also explode on impact. Also, the E-tech Seraph shotgun, the Omen, can be dropped by the Ancient Dragons of Destruction, the raid bosses of the DLC. The Omen fires nine projectiles in a circle with one in the middle, that contract and expand as they travel. The Omen can also legitimately spawn without an Element, in which case it deals explosive splash damage and non-elemental direct damage.

All common E-tech shotguns and the Omen cannot spawn with the vertical grip accessory.

Vladof and Dahl E-tech assault rifles are called Blasters, whereas the Bandit version is aptly named BlASSter in accordance with their poor grammar.

The sniper rifle types are Railer, Hybridfication, and Moloko. All E-tech sniper rifles consume two ammo per shot. Shots fired carry an large innate damage bonus and act as beams and reflect off surfaces and pierce enemies. The increased ammo consumption combined with the reduced critical hit damage inherent to E-tech weaponry, E-tech snipers are out-damaged on critical hits by a large margin compared to their standard counterparts.

In the main game, badass creepers, found in Caustic Caverns, have a chance to drop a Legendary E-tech sniper rifle called the Longbow, which fires an arcing Minecraft style arrow instead of normal beams that are affected by gravity, will not spawn with a scope, has fixed incendiary element, and consumes only one round per shot. All E-tech sniper rifles ricochet off terrains.

Types include PRAZMA CANON, PBFG, Launcher, and Topneaa. All rocket launchers with the exception of PRAZMA CANONs deal maximum damage at a large affected area. These have a massive blast radius for enemies with a reduced self-damage blast radius.

In the main campaign, the hidden raid boss, Vermivorous the Invincible, has a chance to drop a Legendary E-tech rocket launcher, the Norfleet, that fires three erratic projectiles instead of one straight firing projectile and consumes 3 ammo per shot. In the Captain Scarlett and Her Pirate's Booty DLC, the raid boss, Hyperius the Invincible, can also drop the Norfleet.

Bandit - PRAZMA CANON - Hurls balls of energy that arc and drops more balls of energy as it travels, similar to carpet bombs.
Maliwan - PBFG - Causes enemies to take more damage after the shot. If the initial shot hits an enemy, it will spread via blue spheres to the surrounding enemies in a large area, making it one of the best launchers for multiple target situations. The cataclysm effect also ignores terrain and cover.
Tediore - Launcher - Fires a slow moving sphere. Explosions cause enemies to be encapsulated by a blue sphere and give this effect off to other nearby enemies (same function as the PBFG). The cataclysm effect also ignores terrain and cover. Note: Sometimes the rocket launchers may spawn with the blue rarity Tediore material rather than the purple rarity material.
Vladof - Topneaa - Surrounds enemies in a large radius with damaging energy spheres. Dying enemies encapsulated in a blue sphere of energy will disappear. Each third shot does not consume ammunition. The cataclysm effect also ignores terrain and cover.

The Breath of Terramorphous is the only E-tech grenade mod. Being a grenade, the grenade lacks any sort of E-tech style part on it and reuses the skin of their legendary grenade mods. This grenade mod, however, has a huge blast radius from the child grenades it spawns. It is manufactured by Vladof, and is a rare drop from Terramorphous the Invincible.

Vladof - Breath of Terramorphous - Always incendiary. Area of effect grenade; spawns child grenades that shoot geysers of flame into the air, burning anything within the blast radius. 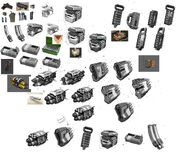 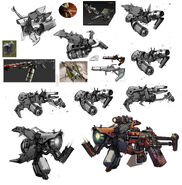