A Game of Games

Dwarven Allies is a story mission in Tiny Tina's Assault on Dragon Keep. It continues the journey to the tower of the Handsome Sorcerer through the Mines of Avarice, home of the dwarves.

Dwarven Allies takes place in the Mines of Avarice, where King Ragnar and his dwarves await to provide new alliances and a road to the Handsome Sorcerer.

The first stop towards reaching Ragnar is Camp Dwarf Torture, where orcs have taken over part of the mine and converted it towards the purpose of torturing dwarves. This area on a ledge can prove hazardous when battling the resident orcs, as their knockback attacks can send a Vault Hunter over the edge, or into one of the spike pits in the area. To make matters worse, their leader Warlord Turge can level himself and his fellows five times, transforming the orcs into far more powerful opponents. The orcs can be lured to safe fighting positions however, and most will follow almost to the safer battleground at the entrance if they are shot at to keep them chasing.

Ragnar can be found beyond the torture room, guarded by other dwarves, and with minimal other threats in the vicinity. The meeting doesn't go according to plan however, when Brick's influence leads to a Vault Hunter punching Ragnar to death instead of talking to him. As a result, the dwarves all become hostile for the remainder of the Mines of Avarice.

The way out is clear, and lies beyond a bridge at Wizard's Crossing briefly blocked by the wizard Claptrap. The gates remain shut, and can only be opened by assembling four dwarf runes. Claptrap holds the key to this information and by the time anyone catches up with the little robot, he has made his way to Stoneridge Crag. Although Claptrap gives up the first rune (unwillingly), the area is inhabited by Rock Golems that attack in sequence, followed by a Badass Iron Golem. Again, high clifftop ledges present a danger when fighting enemies with knockback attacks, so adventurers would be well advised to stay well clear of the edge while fighting.

The second rune is protected by more dwarves and a jumping puzzle. The puzzle consists of levitating rocks that provide stepping stones over a lake of lava to reach the stone on which the rune sits. These stones rise and fall, and ordinarily cannot be traversed to reach the rune, but after one fall into the lava new stones appear, providing an alternate path around to the right. These are mostly just timed jumps, although the second-to-last stone scrapes under another, knocking characters off if they are caught there. By waiting out this close pass between the two rocks before landing on the small one that passes underneath, a Vault Hunter can then land on it and have enough time to jump to clear before it passes underneath again. There is only one chance to reach the final rock, which provides one last easy jump to the rune.

In the event that players continue to fail the jumping puzzle, any fall into the lava results in a character respawn with no reconstruction fee. After repeated failures, a magical stone bridge simply extends to the rune, providing a simple walk. This bridge also appears if the puzzle is successfully completed, and with it comes another dwarf ambush.

The third rune is gained by completing another puzzle at the Gilded Forge. This puzzle is a memory puzzle. The cube is initially lowered by activating the surrounding six crystals in any order. Once lowered, the crystals will fire lightning at the cube. The crystals should then be activated in reverse order from which the cube indicates to successfully solve the puzzle. After the first failed attempt, an optional objective to punch the puzzle will circumvent any further need to complete it, however, if a Vault Hunter punches the puzzle, they will no longer be able to access the chest and vault symbol that resides on the other side of the rune.

The fourth rune is in possession of Greedtooth, a dwarf leader who appears to be trying to fill the void left by King Ragnar. He refuses to give it up and attacks in his Gold Golem. The fight can be halted by attacks on the Weird Ass Magic Globe, a magical tankard that flies around inside a force bubble. The entire bubble presents a target area, and can soak up a surprising number of hits before being destroyed. Destroying the tankard completes an optional objective to release Greedtooth from his curse, although this only results in a brief respite before Greedtooth recognises the king's killer and renews his attack.

The Gold Golem leaps onto the field of battle for three stages of the fight. It is a tough opponent with a long-range fireball attack and a mid-range energy beam supplementing physical blows. For each third of its life diminished it will return to Greedtooth's starting position and rain down fireballs while basic dwarven units rush out instead. Occasional Aerial Golems will also provide air support with energy beams of their own while the Gold Golem remains at a distance. Finally, with the Gold Golem's destruction, the way is clear to retrieve Greedtooth's rune and return to Wizard's Crossing.

With all four runes in hand they can be assembled to complete the password unlocking the gate to Hatred's Shadow.

"Though the Vault Hunters ended up inadvertently killing most of their intended allies, the Mines of Avarice nonetheless proved fruitful. After a bit of violence and some crass humor, they found themselves closer than ever to the Handsome Sorcerer's tower and the queen trapped inside it." 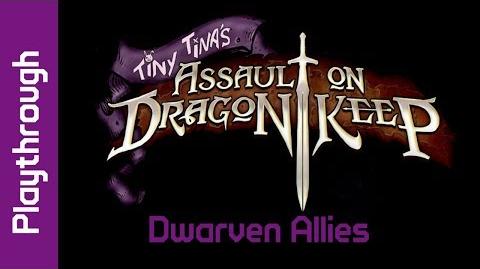