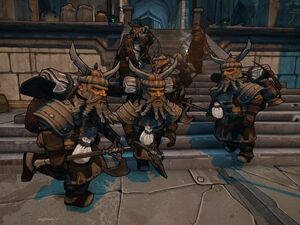 Dwarves are short and stocky tunnel-dwellers in Tiny Tina's Assault on Dragon Keep. They are a race of stunted miners and inventors, notably having constructed a number of complex puzzles and traps, as well as having some powerful golems at their disposal.

While initially not hostile, the dwarves soon become enemies after the murder of their leader, King Ragnar.

Dwarves field a relatively high proportion of ranged units in Tiny Tina's Assault on Dragon Keep. While at first glance they appear to have very few gunners, the other melee-orientated units soon prove to be effective long range attackers with a variety of thrown weapons. The resulting attack pattern is generally a mob of pint-sized front-line fighters charging into close range with a few thrown weapon arcing in from far corners, sometimes with a Dwarfzerker laying down covering fire from the back ranks.

Retrieved from "https://borderlands.fandom.com/wiki/Dwarf_(faction)?oldid=478035"
Community content is available under CC-BY-SA unless otherwise noted.