This article is about the location. For the DLC itself, see Tiny Tina's Assault on Dragon Keep.

Dragon Keep is a location in Tiny Tina's Assault on Dragon Keep. Standing atop a mountain, it is the Handsome Sorcerer's seat of power. Seen from a distance, the tower is enshrouded in a vortex of dark cloud. Up close it pierces the sky with sheer walls.

Access to the tower is by way of an elevator at its lowest reaches with a Fast Travel and vending machines nearby. A stairway spirals up the tower in a clockwise ascent that terminates part of the way up, and at this point a magical teleportation platform provides the only means of accessing the top level. The upper decks are wide and expansive, with several ammo shrines available for use.

A unique sacrificial altar with an attached gas cylinder can be found near the portal to the upper platform. A valve on the cylinder primes the altar to accept sacrifices of items in exchange for a random reward. Known rewards are:

Each of these is accompanied by an announcement about the reward.

When receiving a rain of money, ammunition and/or health

When receiving three bars/stack of Eridium

When summoning a badass

When receiving a weapon of blue rarity or higher

When summoning three skeletons for you to fight

When receiving an explosion sound effect

When receiving a legendary or pearlescent weapon 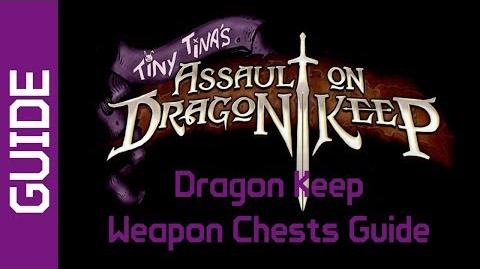 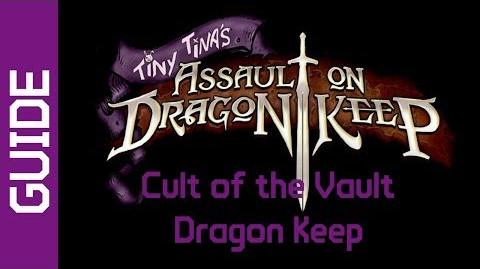 BL2 Dragon Keep Cult of the Vault Guide
Retrieved from "https://borderlands.fandom.com/wiki/Dragon_Keep?oldid=458472"
Community content is available under CC-BY-SA unless otherwise noted.