Dr. Ned is the titular character and the main antagonist in the first DLC, The Zombie Island of Dr. Ned, and resides in Jakobs Cove.

Tasked with providing medical care to the Jakobs Co. employees in Jakobs Cove, Dr. Ned did his job a little too well. He ended up inadvertently creating zombies and other abominations that now run rampant in this region.

Sometime after being hired by the Jakobs Corporation, Dr. Ned decided to experiment with reanimating dead workers with his assistant, Bill. In some part of this experiment, Bill was killed and eaten by one of the zombies. A new assistant, Frank, came as a temporary replacement, but also died, presumably to Ned's zombies.

At some point during his experiments, the zombies became more ravenous for flesh, compared to their ordinary taste in brain muffins and raisins. Ned saw the opportunity to turn the entire workforce of Jakobs Cove into an undead army. He distributed poison in the form of pills at the workers' annual checkups, infecting 97% of the employees. The sick workers then went to Dr. Ned, who then reanimated them as zombies.

Possibly seeing a money-making opportunity, Ned decided to create an antidote for the zombie epidemic based on Skag DNA, which failed and created Wereskags and Ned later added to his army. With Jakobs Cove abandoned and all its inhabitants killed and reanimated, Ned sat back and watched as warrior after warrior tried and failed to defeat the undead horde. It seemed that his plan was foolproof. However, it isn't.

It was originally implied throughout the DLC that Dr. Ned is really Dr. Zed (due to the reuse of assets), who tries to cover it up with frivolous disguises (The mustache seemingly growing from his surgeon's mask.) and unnecessary disclaimers. However, the Game of the Year Edition Guide from Brady Games states that he is indeed "the evil twin brother of Fyrestone practitioner Dr. Zed". It is also revealed in a "behind the scenes" GOTY Launch Trailer of Borderlands that he is Dr. Zed's brother when they can be seen talking and walking next to each other.

During House of the Ned, in sequence:

From his tree house in Hallow's End 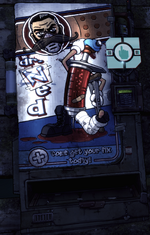