Don't Get Cocky is a side mission in Borderlands: The Pre-Sequel. It is available from the bounty board in Jack's Office after completing the Quarantine tree of missions, including the missions from Lazlo.

The first objective of reporting to the Veins of Helios requires moving to the mission marker at the middle of the platforms. This can be achieved from either direction; approaching from Hyperion Hub of Heroism, or from the Lunar Launching Station to a West-facing platform in approximately the middle of the map, with two jump pads on it. Once there, the supply platform is accessed by using the right blue jump pad on this platform. Highlighted controls are then available to summon a worker bot.

The goal now is to defend the worker bot while it tries to haul back the supplies. This is done by mounting the turret and using it to shoot the space debris and approaching DAHL fighters as well as some meteors. Some optional objectives will pop up requiring the destruction of certain numbers of items.

Once the shipment is safe, the mission is turned in at a nearby console. 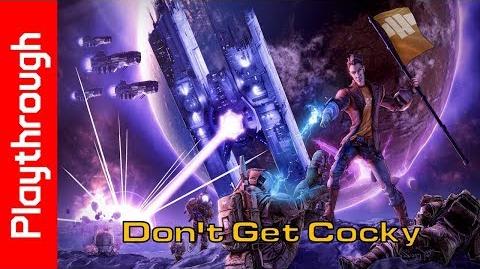 Don't Get Cocky
Retrieved from "https://borderlands.fandom.com/wiki/Don%27t_Get_Cocky?oldid=465251"
Community content is available under CC-BY-SA unless otherwise noted.