The Ultimate Vault Hunter Upgrade Pack Two: Digistruct Peak Challenge is a DLC pack for Borderlands 2 released on September 3, 2013. It is not included in the season pass and is priced at $4.99/£3.99.

The DLC increases the level cap to 72, but also introduces a new ranking system called "Overpower levels". This creates an opportunity for fighting enemies and collecting loot rated up to 10 levels with the free update that came with Commander Lilith & the Fight for Sanctuary. You do not need Commander Lilith & the Fight for Sanctuary installed in order to access overpower levels.

In normal mode, the level in Digistruct Peak will always be 35.

The pack introduces a new area called Digistruct Peak Challenge: a mountaintop training ground for the Crimson Raiders. Upon arrival, researcher-turned-freedom fighter Patricia Tannis is waiting to give the rundown on what’s in store.

The introductory mission, which is balanced for a full team of four players, takes roughly an hour to complete, and winds through a series of twisting mountain paths and open spaces; all of which function as battlegrounds in which characters encounter the full rogue’s gallery of Borderlands 2 enemies.

At first the types, numbers, and locations of each enemy encountered is static, but an element of randomness is introduced as Overpower levels climb higher.

Even though the level cap is 80 with the DLC installed, the new ranking system allows enemies and loot to scale up higher - up to 10 additional levels.

The entire world is affected when the game is set to a certain Overpower level; enemies are more deadly and they drop more powerful loot. Skill advancement still caps out at level 80, but Overpower levels allow higher-level gear. Once all of the Overpower levels are unlocked and a level 80 game is started, enemies will appear at level 90+, and gear rated for level 90 can be used.

Upon reaching level 80 and the completion of the Digistruct Peak arena in Ultimate Vault Hunter Mode, Overpower Level 1 unlocks. Players who attempt the Digistruct Peak arena challenge in Borderlands: The Handsome Collection, are required to get the Commander Lilith & the fight for Sanctuary DLC to gain acces to the additional level cap of 80. To access the additional Overpower levels, players who have reached level 80 must exit the game after completion of the challenge and reload. Upon restarting the game, a prompt appears that will offer options for which Overpower level is desired.

Every time players play through the Digistruct arena at the highest available level the next Overpower level becomes unlocked. There are 10 Overpower levels in total, meaning the arena must be completed at least 10 times in order to reach the maximum Overpower level of 10.

If the host and any additional characters are at the same Overpower level when a round is started, they will all rank up to the next Overpower level once the arena is completed. The table below describes the effective level that game scales enemies to, when characters reach a particular Overpower level:

As additional Overpower levels are gained, enemies will generally begin to spawn at higher levels. These enemies receive a passive damage reduction that is based upon how many levels they outrank playable characters. The exact damage reduction percentages are expressed in the table below:

Generally, most regular enemies will cap at around 92, but there are a few exceptions to this. The Ancient Dragons of Destruction, Dexiduous the Invincible, and Vermivorous the Invincible can reach 3 levels higher, level 93, which grants them 70% damage reduction. Bridget Hodunk and Colin Zaford  cap out at 95, making them the highest possible level among bosses.

Standard goliath enemies can level up to 4 levels higher upon reaching GOD-liath status at 94. The Iron GOD, a max level Golem, can reach level 102 - the highest in game. This grants them a 99.2% damage reduction, meaning weapons will only deal 0.8% of their actual damage against them.

More information about damage reduction can be found on the Damage page.

As with the first upgrade pack, there are a second set of pearlescent weapons to find:

New Legendary class mods are also added to Digistruct Peak Challenge, and can be dropped from chubby enemies: 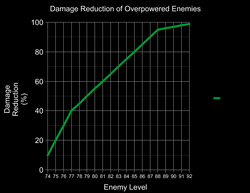