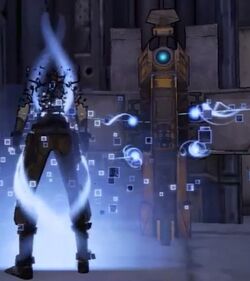 Digistruct is a futuristic technology featured in the Borderlands universe. Digistruct is the technique of having a digital blueprint of an item, person, or creature that allows for it to be built on demand. The exact nature of digistructing is uncertain, as while items are seemingly digitally constructed they behave more like real matter than holograms or even some imitation material. Items scanned by a digistructing device, person or device or even currency like dollars and eridium ingots are deconstructed and stored in a specialized storage systems ranging from planet wide terminals to personal backpack units.

Retrieved from "https://borderlands.fandom.com/wiki/Digistruct?oldid=422141"
Community content is available under CC-BY-SA unless otherwise noted.