To spawn Dexiduous, players must insert 90-99 Eridium into 4 totems scattered around Hunter's Grotto.

In order to spawn Dexiduous the Invincible, four totems around Hunter's Grotto have to be activated using 21-27 Eridium each. Once all are activated, a final lever has to be pulled in order to actually spawn him. If players leave Hunter's Grotto after activating any of the totems, the totems will reset and the players will need to start again.

The totem locations (as seen on the image to the right) are best activated with 1 and 3, and 2 and 4 grouped together as to minimize walking distance.

Once all totems have been activated, the final step is to throw the lever located just west of the lodge. The lever requires no additional cost to activate, and once pulled, will begin to spawn waves of increasingly difficult savages. The final wave consists of two Super Badass Witch Doctors and several Badass Savages, and once they are killed, Dexiduous the Invincible will rise from the lake south of the switch.

Dexiduous is immune to lightning damage, and takes reduced damage from other elemental damage sources. It cannot be afflicted by status effects, but has three critical hit spots which still take reduced damage from everything, and are also susceptible to non-elemental and lightning damage. The weak points are destroyed once enough damage is dealt to them, but slowly new weak spots grow on pre-designated places on the drifter's body, with a maximum of three at a time. These are not necessarily the normal three weak spots as seen on other drifters.

Dexiduous has several devastating projectile attacks which can be hard to dodge without sprinting, depending on the distance between the drifter and its target. At long range, Dexiduous fires three corrosive orbs with a very large splash radius and high damage, enough to kill if more than one orb hits. At long range, it spews a volley of grey projectiles. These do less damage and have less splash than the corrosive orbs, but are much faster and follow each other quickly. Even a third of the complete volley hitting is enough to kill even the most prepared Vault Hunters. Those standing somewhere between his legs will find the attacks virtually impossible to dodge.

There are a few ways to fight Dexiduous, but all of them are commonly based around maintaining a safe distance. This can be somewhat hard to achieve since Dexiduous walks a lot faster than the Vault Hunters, but with some distractions it should be possible to stay far enough to completely dodge his corrosive projectiles.

One tactic is to run past the lodge as soon as Dexiduous appears towards the eastern side. As Dexiduous is too tall he will get blocked by the lodge, and its attacks have an arcing path will end up hitting the lodge. Other drifters may attack from behind, but those can be killed with a few hits to their critical spots. Vault Hunters must maintain a proper safe distance to ensure that Dexiduous's corrosive orb attacks don't pass underneath the lodge and kill the Vault Hunter. Also the northern and southern side of the lodge has open spaces through which Dexiduous can shoot the orbs without any obstruction, although it rarely goes that way unless Vault Hunters strafe to one side for too long.

Because Dexiduous is highly damage resistant, Vault Hunters are advised to bring in some kind of ammo regeneration skill to avoid running out of ammunition unless they are particularly skilled in destroying the weak spots with the ammunition available. Even then it becomes difficult to connect with Dexiduous as it keeps moving erratically. The lodge has an ammo vendor, but Dexiduous's attacks can reach inside the lodge, making this tactic extremely risky. Here an Infinity pistol, and Salvador's ammo regeneration capabilities, can assist greatly in a prolonged fight.

Another tactic is by using a corrosive fan boat. This is an effective way of fighting Dexiduous, as the vehicle is fast enough to dodge all of the attacks. Using corrosive is important, as the flamethrower variant of the fan boat has very limited range, and Dexiduous is invulnerable to shock. While the boat's agility and corrosive launcher provide clear benefits, the fan boat's machine gun has very low accuracy, making this weapon a marginal addition to the fight. In multi-player, it is easier for only one player to use the fan boat, with everyone else at a safe distance from Dexiduous providing support, preferably with the other fan boat close by, just in case the one in use is destroyed.

The most effective way to deal damage to Dexiduous is to destroy his critical hit locations. Due to him swaying a lot and occasionally lowering his head, it can be hard to hit the critical points, especially with sniper rifles or other slow-firing weapons, so one method is to use full automatic weapons to spray bullets over those areas. Another is to try and snipe them. Zer0 has the distinct advantage in this with Vel0city and Precisi0n, allowing for much more accurate shots. When doing this it is advisable to take a high critical hit damage sniper rifle and Amplify Shield to maximize the damage that can be dealt to a single critical hit location in one shot. Using elemental damage ensures that Dexiduous still takes damage even if the shot misses the critical hit location.

There are also several respawning drifters in the area, which could be kept alive and then used as a rally when in Fight For Your Life mode. Other than that, some camps of savages are in the area, though it could be more risky to get their attention. 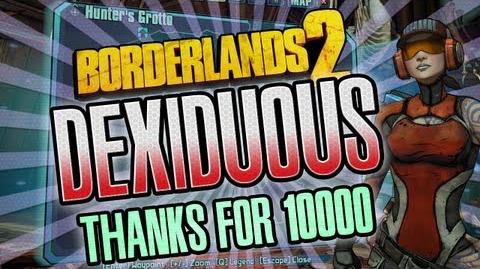 
Retrieved from "https://borderlands.fandom.com/wiki/Dexiduous_the_Invincible?oldid=374796"
Community content is available under CC-BY-SA unless otherwise noted.