The first stage of the mission takes place in the Forest of Being Eaten Alive by Trees where the objective is to follow the queen's trail in an effort to rescue her. The forest is inhabited by primitive enemies that are all vulnerable to incendiary damage, many of which attack by moving into melee range. As such, incendiary long range weapons are valuable to have equipped throughout the area, and incendiary or explosive shotguns provide a useful sidearm option, especially against spiders and Stumpies.

Part of the way through the forest the path branches with a side path leading down to Old Glenn the Blacksmith's Cottage, and taking this path completed an optional objective to explore it. This is worth doing as objectives for the missions Ell in Shining Armor and Post-Crumpocalyptic can be completed in the vicinity of the cottage, as well as a discoverable Vault symbol, but not without a fight. An unbalanced Treant of abnormally high level will emerge from the ground well down the path, which is then quickly rebalanced to a more appropriate level, and from then on the area is simply inhabited by Treants and Stumpies.

The nature of the mission changes at Blood Tree Camp when Davlin deciphers some orcish scrawl and finds that some blood fruit will need to be collected in order to continue. This means venturing down through Blood Tree Camp and a horde of orcs to reach the blood tree on the far side, and among the orcs is Warlord Grug. Grug is a potent adversary who can increase the levels of other orcs around him, and also level himself up several times. In so doing he becomes a Duke of Ork, leaping on his victims to pound them with his stomp attacks, or cleave them with his axe. More treants will spawn part of the way through the camp as well, turning the battle into a three-way fight with orcs and treants pitted against each other.

The blood tree is in a red lagoon beyond the orc camp. Collecting the first fruit awakens the Treant it was attached to, promptly leading to another treant fight. In this case however, it also provides an optional objective to collect the remaining fruit without harming the creature. It is a slow and ponderous beast, so collecting fruit from it is not too difficult, although a high capacity shield might need to be equipped on weaker characters to pull off this brief dance. Once the harvest is complete, the Treant can be attacked without jeopardising the optional objective.

The queen's trail leads deeper into the forest, and within the Immortal Woods the mix of enemies on the mission path changes to a mix of knights, skeletons, and Green Basilisks. A mix of corrosive and explosive weapons offer ideal damage choices against these various foes.

After Davlin is located again he finds the way blocked and insists that help be sought from the White Knight. The White Knight can be found nearby, but when he is approached, both he and the Vault Hunters are set upon by three dragons. These dragons soar high in the air and bombard ground targets with elemental attacks; Red Dragons use fire balls, Blue Dragons attack with shock. These attacks can be formidable, yet characters unable to withstand such punishment for long can be positioned within the tunnel that led into the area where there is ample cover.

When the fight is concluded, Roland leads the way back to Davlin, and obligingly removes the rubble that had been blocking the path. He and Davlin then head for Vitality Grove and the Tree of Life, where Davlin accepts the last blood fruit to begin his ritual. He turns the tables however, and departs the scene after revealing that he is really the Handsome Sorcerer, and the adventurers have just been lured into a trap.

The first of four Skeleton Kings appears with a retinue of lesser skeletons. The battle is confined in a spacious arena, but building ruins provide some cover from the skeletons' ranged attacks. The Skeleton King lumbers around the area delivering potent blows with its weapon, while the other skeletons provide an ever present hazard with their faster movement and variety of attacks. For weapon choices against the skeletons, explosive and non-elemental damage are far more effective than elemental attacks as the Skeleton Kings are resistant to elemental damage.

Each time a Skeleton King falls, its head will fly free to attack as a separate, high-speed unit. A "Skeleton King's Head" is a relatively weak target, and can be quickly destroyed with shotgun blasts to the face when they strike, but their speed can also make them hard to hit at a distance. If the flying head is not destroyed promptly it can resurrect the fallen Skeleton King. If it is destroyed in time, the next Skeleton King will awaken, and this pattern repeats until all four have been destroyed.

Roland provides some much-needed support during the fight. Enemies getting close to him will cause him to deploy his turret, and any Vault Hunter standing within its circle will benefit from regenerating health and ammunition.

Following the battle with the skeletons is a chamber, contains several jars and three loot chests, with the loot chest in the middle always appearing as a Mimic. Passing the chamber is a short trip into a rocky canyon and a bridge, and here the path is impeded by a few Baby Red Dragons, one or two Dragons flying in the background, and numerous Basilisks on the bridge. Baby Red Dragons and large Dragons will not attack unless attacked first, while Basilisks will always attack the approaching Vault Hunters.

"After enlisting the help of a fallen warrior, the Vault Hunters fell victim to the Handsome Sorcerer's treachery and learned of the Queen's imprisonment. Thankfully, a new group of allies awaited them in the dwarven mines..." 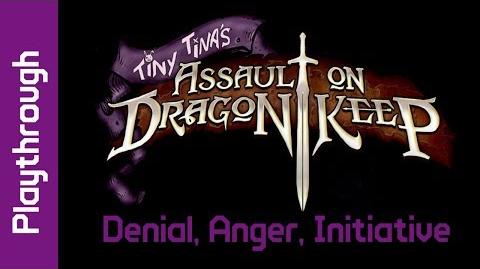