Optional mission
Defend Slab Tower is an optional mission in Borderlands 2 given by Rocko. It becomes available after Rocko's Modern Strife is complete.

The objective of the mission is to protect a Hyperion Supply Crate from an assault by loaders. At the start of the mission, the Vault Hunter is given three beacons to position Slabs in preparation for the impending assault. It is worth noting that when the previously friendly goliaths get their helmets shot off, they will not only begin attacking friend and foe alike per their usual behavior, but they will attack and destroy the cargo that is meant to be protected. For this reason it is advisable to place the goliaths on the front lines, furthest away from the cargo. However, when the Badass Loaders arrive, they will land in the Slabs camp, not far from the crate. If the raging goliaths are around, they can knock back and stagger the loaders with their powerful melee attacks, providing extra time to the Vault Hunters.

Once the beacons are set, loaders will start their attack run. A bandit turret at Bloody Knuckle Point can be commandeered to help whittle away their ranks as they march in from No Man's Land. The turret is very fragile, however, and is usually destroyed instantly if it is used. Slabs will also pitch in, their buzzards providing air support while various ground units attack and slow the Hyperion advance.

Since the enemies are loaders, strong corrosive weapons will come in very handy throughout the fight, notably: the Bad Touch, the Lady Fist, the Hornet, the Sand Hawk, the Teapot, and corrosive rocket launchers. Area of effect and Bouncing Bettie corrosive grenade mods can be used to great effect on the bridge as well as other narrow sections that the loaders have to go through.

Once the loaders' attack has been routed, it's time to investigate the supply crate that they wanted so badly.

"You've successfully defended the Hyperion supply drop and stolen the goodies inside. This is the exact kind of act that would earn you a tremendous amount of respect from your fellow Slabs, were they not completely insane and/or stupid." 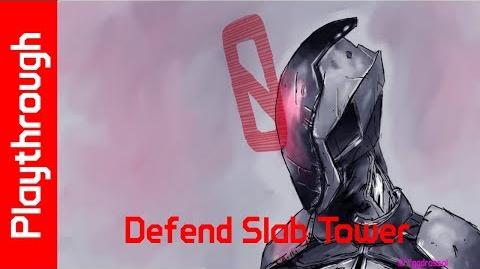