For the similarly-named final location of Claptastic Voyage, see Deck 13.5.

Deck 13 1/2 is a location in Borderlands: The Pre-Sequel. It was first introduced in, and is the first location visited during Claptastic Voyage.

Deck 13 is where the Fast Travel is located, and therefore where the adventure to go inside Claptrap's mind officially begins. There are healing, ammo, and weapons vending machines located to the right of the Fast Travel terminal, a short corridor that connects to the Violence Quantification and Calibration Chamber, and also features a ladder that leads up to the closed-off entrance of Deck 14, where Vault Hunters can descend to Deck 13 1/2.

The Violence Quantification and Calibration Chamber is a firing range, similar in appearance and identical in function to the one found in Marcus's shop in Sanctuary in Borderlands 2.

There are three enemies tied up in the firing range for weapon damage testing:

Upon climbing the ladder up to Deck 14, turning around and looking down will reveal a small outcropping that leads to Deck 13 1/2. The small lab in Deck 13 1/2 is where Handsome Jack is located and where he has set up the digitization process for entering Claptrap's mind.

(not an officially-named area in terms of map exploration)
The S1M1-S1M Room is the where the Vault Hunters first appear after being digitized. It is here where they acquire Handsome Jack's Admin Password and await the initialization of and enter the simulation of Claptrap's mind. 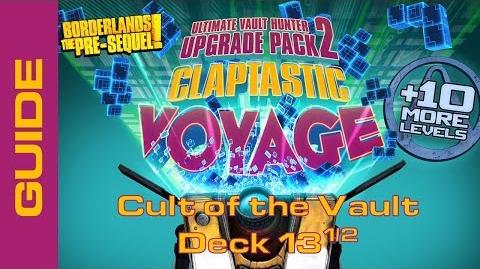 Deck 13 and half CoV Guide
Retrieved from "https://borderlands.fandom.com/wiki/Deck_13_1/2?oldid=433211"
Community content is available under CC-BY-SA unless otherwise noted.