For the similarly-named first location of Claptastic Voyage, see Deck 13 1/2.

Deck 13.5 is a location in Claptastic Voyage. It is an illusion created by 5H4D0W-TP that initially looks identical to Deck 13 1/2 with the door closed. 5H4D0W-TP uses Deck 13.5 to deceive the Vault Hunters into believing that he is Handsome Jack, which leads them to inadvertently return the H-source to him after his defeat. Upon "Jack" receiving the H-Source, the illusion melts away, dropping the Vault Hunters into a sub-level where the rest of the area is located.

When Vault Hunters first enter Deck 13.5 during the mission END OF LINE, the area is an identical replica of Deck 13 1/2 with Handsome Jack waiting for the H-Source, but with the exit door closed. Once the H-Source is handed over to "Jack", the illusion distorts and vanishes. At this time, the Vault Hunters are dropped into another area containing healing, ammo and weapons vending machines and an exit-only Fast Travel station.

This is the large arena area where ECLIPSE and EOS are fought. When Deck 13.5 is first entered during END OF LINE, the arena is hidden from sight beneath a corridor leading to a throne room that dissipates when Claptrap declines 5H4D0W-TP's offer of an alliance.

Raw Code itself is composed of various disjointed hexagonal or rectangular islands amidst a vast undulating red floor that acts like lava, dealing heavy incendiary damage to Vault Hunters that contact it.

Once both ECLIPSE and EOS are defeated, a small platform stylized as pulsating, glitching cubes appears at the far northeast of Raw Code. The platform holds a transition that will allow Vault Hunters a safe return to the actual Deck 13 1/2.

Whenever Deck 13.5 is revisited, the corridor and throne room will not exist, instantly revealing Raw Code itself instead. 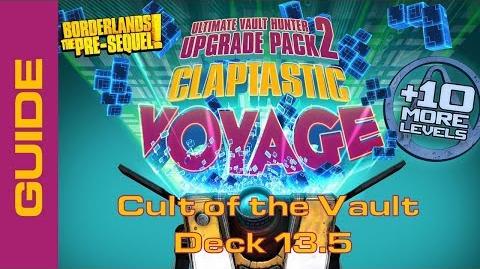