Summon Deathtrap to fight for you.

Borderlands 2
Deathtrap is the science project-turned bodyguard of the Mechromancer class, Gaige. Formerly called "D374-TP" before completion, it is now affectionately called "DT" or "Deathtrap" by Gaige, its creator. Gaige's skill, "Summon Deathtrap," summons Deathtrap to fight for her.

Deathtrap's main method of attack is a single melee strike with its digistructed claws every 1.5 seconds. Against flying or otherwise out-of-reach enemies, Deathtrap will fire a highly accurate electric bolt.

Some of Gaige's skills increase Deathtrap's abilities. Robot Rampage adds a flurry of melee swipes, Explosive Clap adds an explosive attack with an area of effect, Make it Sparkle adds elemental damage to Deathtrap's melee strikes, The Stare adds a ranged incendiary attack, and Buck Up can restore the shields of both Gaige and her allies. If Gaige passes a roid shield onto Deathtrap through Sharing is Caring, Deathtrap will receive the roid shield melee bonus.

Deathtrap is a hulking, floating, robotic torso with one large eye, no legs, and massive arms ending in digistructed claws. Parts of its body have small motifs, including a skull, bones, a padlocked heart, and tally marks. Deathtrap's appearance will vary depending on Gaige's single-point skills, with an underlying theme from each skill tree. Yellowish bulk and armor are typical in Best Friends Forever; Little Big Trouble offers various metal spikes and protrusions; and blood-red blades, claws and bones pervade Ordered Chaos. 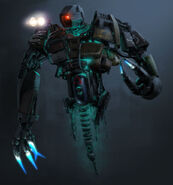 Retrieved from "https://borderlands.fandom.com/wiki/Deathtrap?oldid=475899"
Community content is available under CC-BY-SA unless otherwise noted.