Death Race Pandora is an optional mission in Borderlands that becomes available on Lucky's Bounty Board after Powering The Fast Travel Network is complete.

"There's an old race track in the Dahl Headland, called the Ludicrous Speedway. It was great in its day, but it's been abandoned since the corporations pulled out. I'm thinking of reopening the place, but there's a catch. It's been overrun with vermin. I need someone to go out there and kill all the bugs." 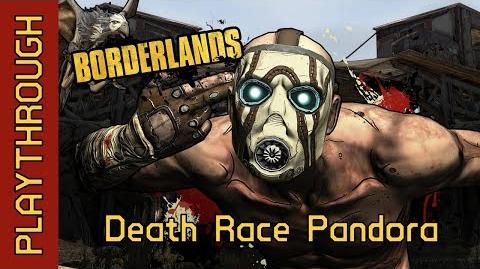 Kill the Scythid Crawlers at the racetrack.

The racetrack is west out of the watering hole in the north-west corner of the Dahl Headlands. The mission is simple: kill any scythid on the track by any means.

Splattering the scythid with a vehicle is the quickest method of killing them, with a chance of damaging a vehicle should it impact with Badass Elemental Scythid. There is a Catch-A-Ride halfway through the course in case any Outrunners get destroyed. Once fifty have been killed head back to Lucky to receive the reward.

However, should the adventurer(s) choose to earn as much XP and loot as possible while attempting the mission, the mission should then be attempted on foot. This will not only keep the adventurers from having to continuously enter and exit a vehicle to pick up loot, but allow access to their action skills as certain characters have skills to earn more items. In theory, the team could even pick and choose which Scythids to kill, like Badass variants for example, if only to make as much as possible out of this mission.

On Playthrough 2, the tougher scythids will cause the destruction of the vehicle in short order. It's best to go slow, clearing out an area by running over bugs (which is the fastest way to kill them) until the vehicle's condition is low, then back into the area just cleared and shoot at them from a distance until the vehicle is restored. When an area is completely cleared out, the area can be easily looted before proceeding on to the next section.

"I should be able to get the track back open for business now, thanks to you. Hope this paycheck covers it."