Dahl is a multi-conglomerate corporation featured prominently in Borderlands, specifically on planet Pandora. One of Dahl's primary businesses is the manufacture of weapons. It is apparently the largest weapon manufacturer on Pandora.

Dahl weapons are designed for landing multiple accurate shots in a small amount of time. It is advised to shoot while aiming down sights with almost all Dahl weapons to fire many bullets, but for fully automatic weapons, only do so at long range. With Rocketeers and Grenadiers, one should fire the weapon like they would with similar armaments made by other manufacturers.

Dahl firearms tend to have elevated recoil reduction. Their weapons are said to be marketed to mercenaries and are generally finished in a green camouflage print (some rarer Dahl guns are seen in desert and urban camouflage print). Dahl weapons are mostly named after animals.

The following is a list of their named guns, legendary rarity guns and other products.

In Borderlands 2, all Dahl manufactured guns have burst fire when aiming down sights (ADS).

The following are items made by Dahl.

In addition to their full range of common Pistols, SMGs, Assault Rifles, and Sniper Rifles, Dahl products in BLTPS include items listed below.

The Alternative Fire mode for Dahl weapons features variable firing modes of full-auto, semi-auto or burst fire, with each weapon being able to access two of the three. Most Dahl weapons come with a scope, in which case it will always have different zoom levels for the firing modes.

If a Dahl weapon comes with full-auto mode, its scope (if present) will always have the lowest zoom level in this mode, and the fire rate stated on the item card will be that of this mode.

Pulling the trigger results in a quick burst of 3-5 shots with higher fire rate and accuracy and lower recoil than in full-auto. If the weapon does not have a full-auto mode, the fire rate stated on the item card will be that of this mode.

Pulling the trigger results in a single shot with high accuracy and bonus damage.

If a Dahl weapon comes with semi-auto mode, its scope (if present) will always have the highest zoom level in this mode. 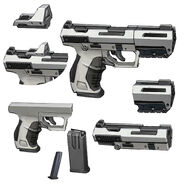 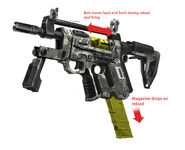 Add a photo to this gallery
Retrieved from "https://borderlands.fandom.com/wiki/Dahl?oldid=452996"
Community content is available under CC-BY-SA unless otherwise noted.