Damage Per Second, or DPS, is a common simple way to assess the effectiveness of a weapon. It eliminates factors of enemy size and distance, weapon recoil and recoil reduction, accuracy, aiming, critical hit zones, elemental effectiveness against target types, and elemental damage over time, reducing the weapon to its most basic aspects: how many bullets it can fire, and the destructiveness of those bullets.

The simplest DPS number ignores all factors except rate of fire and damage, reflecting what would be the cyclic rate of fire figure for a real life weapon. As such, it is only a useful figure if it is assumed that a single target will only need a single magazine of ammunition, either because the target is relatively weak (e.g., a bandit) or because the magazine is large (e.g., a support machine gun). It can be expressed as a pair of numbers: the amount of damage per second that the weapon will deliver while firing, and the total amount of damage available in a magazine.

Once you need to deliver a total of more than Dmagazine damage, whether to a single target or an aggregate of targets, then a more general formula accounting for reload time becomes necessary.

Let tunload be the time it takes to unload a fully loaded magazine, i.e., to fire every shot.

Let treload be the time that it takes to reload an unloaded magazine. There are four ways to compute this value. We can take a stopwatch and time the operation in-game. We can model the weapon completely in Gearcalc, then look up the calculated "Reload" attribute (and hope that Gearcalc calculated it correctly). We can look up the effects of the weapon's component parts-- typically, its stock, magazine, and material, all of which are usually indicated within the weapon's name-- and perform the reload speed calculation ourselves. Or if the weapon's item card lists an explicit Reload Speed bonus or penalty, we can apply that statistic against the base reload time of the weapon.

Let B be this base time, and RL be the published Reload Speed bonus on the item card. treload would then be

For example, consider this Tediore shotgun. 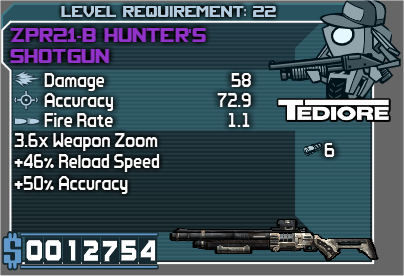 The item card presents a Reload Speed bonus that takes into account a bonus from its material and magazine, along with a penalty from its stock. Combat shotguns have a base reload speed of 4 seconds, so the weapon has an actual reload speed of 2.74 seconds[1]

Given tunload and treload, we can compute an aggregate rate of fire Rsustained that includes the time spent reloading the weapon.

And DPSsustained is a DPS that allows for reload time.

For certain skills, DPS can provide a tool with which to assess the skill's effectiveness.

Reload speed buffs such as Fast Hands and Rapid Reload will reduce treload. The percentile diminution is not multiplied onto the speed without the skill, but rather is factored into the denominator of the overall
$ \frac{k}{1+v} $
relationship.

Rate of fire buffs such as Quicksilver directly increase R.

Magazine size buffs such as Overload, the first line of Heavy Gunner, or the fifth line of Survivor directly increase M, and through that Dmagazine.

Buffs to accuracy/spread (e.g. Focus or Enforcer), recoil reduction (Rapid Reload or Assault), and tech pool regeneration (Spark) all fall outside of the DPS formula.

Retrieved from "https://borderlands.fandom.com/wiki/DPS?oldid=314227"
Community content is available under CC-BY-SA unless otherwise noted.