Crimson Enclave is an alpine base area controlled by the Crimson Lance.

The Crimson Enclave contains three uplink stations that form a crucial part of the ECHO communication system. These must be brought back online individually as part of the main storyline.

There are three ECHOnet uplink stations at the extremities of this area. One of the facilities needs to be reached by a bridge on which Crimson Lance soldiers are fighting off Eridian Guardians, hinting at the impending endgame. Each facility is guarded by a contingent of Crimson Lance soldiers and a Gatling Turret. They are multi-level structures, and all have doors at both ground level and roof level, but only one door on each building is unlocked. Two have unlocked entrances at ground level, and the third with the unlocked entrance on the roof.

The control booths of all three are located in the middle level with adjoining accommodation rooms.

At the entrance to the Crimson Fastness are two Vending Machines; a Med Vendor and an Ammo Vendor. A Catch-A-Ride is also positioned a short distance downhill from the entry area, leading up to the fortress' large front gate, which in turn leads back out into the Salt Flats. However, barriers prevent driving a vehicle far in the Crimson Enclave compound. 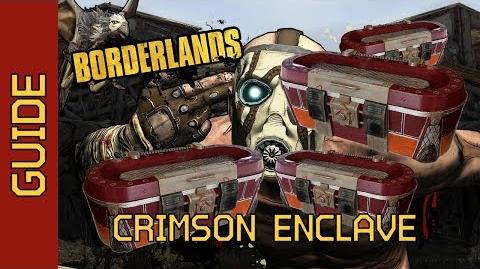 Retrieved from "https://borderlands.fandom.com/wiki/Crimson_Enclave?oldid=430253"
Community content is available under CC-BY-SA unless otherwise noted.