Crazy About You is a story mission in Captain Scarlett and Her Pirate's Booty.

Herbert's recordings appear to be on a nearby boat suspended precariously above the canyon, but when the boat is approached an explosion scatters the ECHO recorders far afield. Initially there are a few spiderant enemies to contend with, but most of the work reaching the recordings involves fighting through Maroonie's Clipper, a landlocked ship now acting as a major pirate base. Beyond Maroonie's Clipper lies the Dreg Scrapyard and its resident spiderant population where the final two ECHO recorders can be found at each end.

Once the four ECHO recorders have been gathered, they must be returned to Herbert. Unfortunately the lock on his chest is jammed, and once it is shot off the compass piece inside is revealed to be broken, thus launching the next chapter of the story, to fix the broken compass piece. 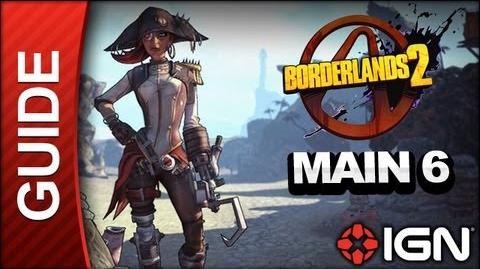 Crazy About You - Commando Walkthrough
Retrieved from "https://borderlands.fandom.com/wiki/Crazy_About_You?oldid=426768"
Community content is available under CC-BY-SA unless otherwise noted.