Corrosion of Dignity is an optional mission in the Claptastic Voyage DLC from Borderlands: The Pre-Sequel.

This short mission starts with D1GN1TY-TP briefly thinking that he's needed for something, but then realizing that Claptrap's dignity remains an unnecessary commodity. D1GN1TY-TP resigns himself to his fate, and the Vault Hunters must attack him with a corrosive weapon. Once the corrosive effect takes hold, D1GN1TY-TP embraces the feeling, only to be surprised when he survives the corrosive process (even though he's been reduced by this point to his eye). He resolves that his indomitable spirit must soldier on, and thanks the Vault Hunters for their assistance. He is then defecated on by a passing bird, and the mission can be turned in.

Turn In: What remains of D1GN1TY-TP

"You tried your best, but dignity is a hard thing to kill." 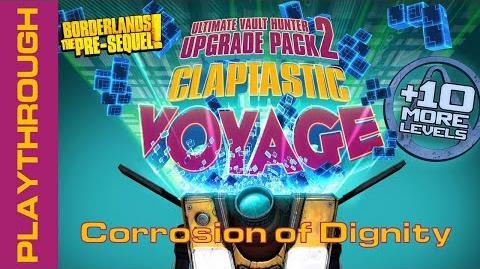 Corrosion of Dignity
Retrieved from "https://borderlands.fandom.com/wiki/Corrosion_of_Dignity?oldid=416381"
Community content is available under CC-BY-SA unless otherwise noted.