On the basis of statistics, the Conference Call is not that much different from a purple-rarity Thinking shotgun, having about 5% lower accuracy but on average one more round in its magazine. Although it has a lower projectile count, five projectiles to the Thinking's six, each of those projectiles do approximately 20% more damage, in effect retaining the same overall damage but dividing it over a smaller number of projectiles.

What sets the Conference Call apart is its special ability: projectiles fired by the weapon will periodically spawn two additional projectiles as they travel, up to four times per original projectile. These additional projectiles shoot off horizontally perpendicular to the original projectiles, both "child" projectiles traveling in opposite directions from each other. This causes the Conference Call to deal higher damage against most targets and substantially higher damage versus larger enemies such as The Warrior or Terramorphous the Invincible, as well as being indirectly capable of bypassing physical shields such as those carried by Nomad Torturers. Its damage potential can also be raised significantly if obtained with the "Practicable" prefix and associated extra pellet count accessory, raising its initial projectile count from 5 to 7.

As with all shotguns, elemental Conference Calls do not suffer a damage penalty compared to non-elemental versions, making elemental varieties highly useful against element-vulnerable large bosses such as BNK-3R.

The Conference Call is an extraordinary weapon for use with Gaige's Anarchy builds as its characteristic (rate of fire, magazine size and special weapon effect) are the optimal companion to gain stacks and cause damage. 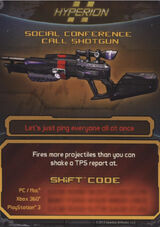