Combat rifles fall into two families, differentiated mostly by their magazines: combat rifles proper, sometimes called burst-fire combat rifles, and machine guns (sometimes called support machine guns) capable of fully automatic fire. Operationally, the two families differ strongly. Combat rifles have smaller magazines that reload more quickly, firing a short burst of shots with each fire command, while machine guns have larger magazines that reload more slowly, firing continuously. Other than magazines, the two families share most parts, though certain accessories are specific to one or the other, and there are also certain family-specific bodies, sights, and stocks.

Note: Combat rifle parts also include a grip. However, the grip does not affect any of the weapon's attributes. Each grip design is specific to the weapon's manufacturer.

A combat rifle's name derives from the body, stock, and magazine parts present on the weapon. 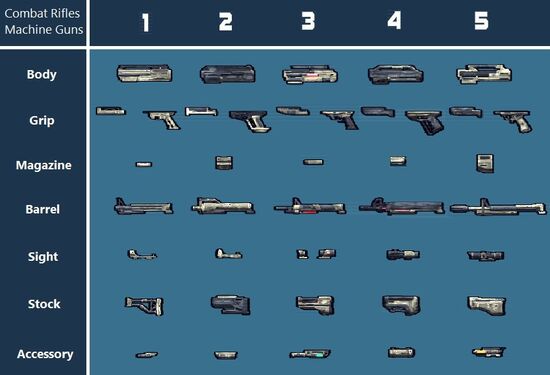 The body of a combat rifle is usually easy to identify, since the model name declares it straightforwardly.

Burst-fire combat rifles and support machine guns have different baseline bodies. Any combat rifle with body1 is burst-fire, while any with body2 is a machine gun. The other three bodies are common to both models.

The stock is completely specified within the weapon's model number. For unique weapons without a model number, the stock is easily distinguishable in profile.

The magazine is specified within the weapon's model number. For unique weapons without a model number, they're mostly easily distinguished by the weapon's ammo capacity. Burst-fire combat rifles and support machine guns use completely different magazines. Any combat rifle with mag1, mag1_pounder, or mag3 is burst-fire, while all others are machine guns.

Primarily, the magazine specifies the number of rounds of ammunition carried by the combat rifle; beyond that, it influences weapon damage and reload speed, and can affect rate of fire and the weapon's tech level as well.

All burst-fire combat rifles have an ammunition capacity of 6, 12, or 18, determined solely by the magazine part.

Support machine guns will have different ammunition capacities depending on the manufacturer, the material grade, and the magazine part. Vladof and Torgue weapons start at 24, Atlas at 27, and S&S start at 33, with Atlas and S&S offering further increases with increases in material grade.

While combat rifle barrels do not affect the weapon's model number, they are easy to distinguish visually from their overall length and the profile of the flash suppressor or shroud at the end of the barrel.

Burst-fire combat rifles and full-auto machine guns have different baseline barrels. Any combat rifle with barrel1 is burst-fire, while any with barrel2 is a machine gun. The other three barrels are common to both models.

Barrels strongly affect the weapon's damage and accuracy, and can influence recoil reduction and weapon tech level as well.

As with all weapons in Borderlands, the grip does not affect any of the combat rifle's attributes. Each grip design is specific to the weapon's manufacturer, therefore each combat rifle or machine gun of the same manufacturer will have the same grip.

Burst-fire combat rifles and support machine guns use completely different sets of sights, though the visuals resemble one another in some cases.

All burst-fire combat rifles have some form of sight.

A full-auto machine gun frequently appears without a sight at all, sight_none.

Unlike other parts, the accessory part does not have a consistent effect on a weapon's attributes: some accessories boost tech, some alter recoil, some increase damage. Some accessories grant a special property to the weapon, Elemental Damage, beyond mere attribute modification; furthermore, almost all accessories make their weapon eligible for a special name prefix or title describing the weapon's altered behavior, such as "Frantic" or "Intense."

Most accessories are easy to differentiate visually. They always appear under the barrel, immediately in front of the foremost weapon grip.

An accessory may or may not be present on any given combat rifle, and no more than a single accessory may be present, which is why the game will never spawn, for example, a legendary Frantic Ogre.

While the elemental and Deathly accessories are common to both families of combat rifles, the rest are specific to one or the other.

There are four different elemental accessories, acc3_corrosive, acc3_shock, acc5_explosive, and acc5_incendiary, corresponding to the four different varieties of Elemental Damage. Each glow in the color corresponding to their element, making them easily identifiable. Elemental accessories grant shots fired from the combat rifle elemental properties, imposing a -40% damage penalty in exchange, and grant an increase to the weapon's overall tech level.

The accessory of the legendary Draco visually resembles a non-elemental Deathly accessory, while that of Ogre resembles an ordinary explosive elemental accessory. Both appear only on support machine guns.

The Deathly accessory acc4_Deathly grants a combat rifle a 20% damage bonus and -25% recoil reduction, but exacts a -25% accuracy regeneration penalty in exchange.

The Intense accessory acc2_Intense grants a burst-fire combat rifle a 50% bonus to critical hit damage, along with a +2 tech bonus, -15% spread bonus, and -40% bonuses to minimum and maximum accuracy, making the weapon more able to place critical hits reliably.

The Frantic accessory acc1_Frantic grants a machine gun a 30% increase in its rate of fire, along with a -60% bonus to reload speed.

The Shattering accessory acc1_Shattering grants a machine gun a 30% damage bonus, along with a -60% bonus to reload speed.

The part acc_none serves as a placeholder for a weapon with conventional behavior, nothing more. A combat rifle with this non-part will have no accessory visible beneath the barrel.

Other than unique drops, a combat rifle name consists of the name of its body, a model number comprising stock and magazine, a possible manufacturer-specific material code, a prefix derived from its attributes or accessory, and a title.

The first element of the combat rifle name is a simple function of its body part. To recap:

The model number consists of the sum of the number codes for the weapon's stock and magazine. Weapons with both stock3 or higher and any of the enhanced magazines--mag1_pounder, mag3, mag4, or mag5--

The title is determined either from the weapon's overall attributes, its accessory, or a legendary part. If the weapon does not qualify for any of these, its title defaults to "Rifle" or "Machine Gun."

Retrieved from "https://borderlands.fandom.com/wiki/Combat_Rifle/parts?oldid=436521"
Community content is available under CC-BY-SA unless otherwise noted.