Hector is the leader of New Pandora, a collection of ex-DAHL soldiers betrayed and abandoned by their superiors many years ago, and acts as the main antagonist of the Commander Lilith & the Fight for Sanctuary DLC.

Hector was once the leader of a large unit of Dahl soldiers. He and his soldiers were promised by Dahl that for their commendable efforts on the battlefield, they would receive a planet all to themselves, what was described as a personal paradise. Upon arriving at this planet, Pandora, Hector realized that they had been tricked and that they were going to be used as a mining force.

Hector barely managed to keep the peace between his men, who wanted to revolt against Dahl for what had befallen them. Eventually, in their mining, they stumbled upon an ancient Eridian artifact and presented it to their superiors. At first, Hector and his army rejoiced, believing their luck was finally changing, only to be quickly betrayed again by Dahl, who collapsed the cave's entrance, locking them inside to die.

As Hector and his men began nearing death at the hands of an unknown disease, Cassius Leclemaine stumbled upon Hector and his army while foraging in the mine they were trapped within and began studying their ailment, nursing as many as he could back to health.

Still furious at Dahl for betraying and lying to them about the supposed 'paradise' of Pandora, Hector convinced Cassius to aid him in creating a gas that would change Pandora for the better, leaving out the details of the mass genocide the release of this gas would cause.

Hector has had his eye on Sanctuary for some time, partially due to his and its ties to the Dahl corporation, and due to the presence of the Crimson Raiders and the Vault Key. At the start of Commander Lilith & the Fight for Sanctuary, Hector's New Pandora army besieges Sanctuary and due to poor leadership on Lilith's part, the Crimson Raiders are forced to flee, leaving both Sanctuary and the Vault Key under the control of New Pandora.

As the Vault Hunters traverse and clear The Backburner of Infected, Hector formally introduces himself and reveals his plan to transform Pandora into a botanical paradise. He also admits that the creation of this paradise will kill everyone on the planet besides himself and his army.

Over the course of the Fight for Sanctuary, Hector mocks the lax leadership skills of Lilith and taunts the Vault Hunters with amused disdain as they fight to reach Sanctuary, stating that he's already won. It is only when the Helios moonshot cannon is used to destroy the blast door blocking access to Mt. Scarab Research Center that he becomes serious, declaring that the Vault Hunters have crossed a line and that he will kill them personally.

Soon after, when the Vault Hunters confront him aboard the infested Sanctuary, Hector infects himself with spores and fuses with the Vault Key to become a large plant mutant. Lilith appears during the fight and aids the Vault Hunters against Hector, and they eventually emerge victorious. The Vault Hunters attempt to reclaim the Vault Key from Hector's chest, only for him to suddenly spring back to life and begin accelerating the dispersal process for his gas, taunting them and Lilith all the while.

As Lilith attempts to contain Hector, he absorbs the Vault Key further into himself, boasting that if Lilith kills him it will also destroy the Key. Lilith, now forced to make a very tough leadership decision, responds by using all of her power to banish Hector. In the process, Sanctuary is destroyed and the Vault Key is lost somewhere in the vast Pandora desert. 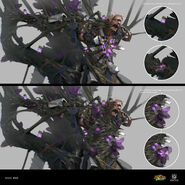 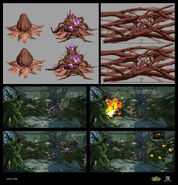 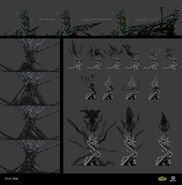