Cluster 00773 P4ND0R4 is a location in Claptastic Voyage. The location is a representation of a section of Claptrap's memory - specifically, areas on Pandora, including Fyrestone and the Vault.

There are Volatile Bits throughout the level.

This is where the Vault Hunters enter the level, and where the two-way Fast Travel station is found. Upon first entering the level during the mission, a control panel has to be activated a few times in order to open up the rest of the area. An exit back to Motherlessboard is here.

This sector of the memory cluster represents the town of Fyrestone and its surroundings as Claptrap remembers it. The area is thick with Software B4nD1Ts, including many Badass variants. The Vault Hunters must repair a bridge to continue with the story mission, the first piece of which is found not far from the broken bridge.

This sector is a snowy area reminiscent of one of Patricia Tannis's dig sites on Pandora, and includes a recreation of her workshop as seen in Borderlands. There is also a large Bandit camp here, populated by Software B4nD1Ts. The second bridge piece is found in here.

This is a large, airless, and severely fragmented area only accessible once the second bridge piece has been picked up from 00773 FRAGLANDS. It is populated by more Bugs and Software B4nD1Ts, and its numerous jump pads must be used to reach the final bridge piece up near the top of the area. The challenge Void Rage can only be completed in this area. A shorcut near the final bridge piece takes the Vault Hunters back to 00773 FYRESTONE

This area depicts the Vault as it was when opened in Borderlands. The Destroyer can be seen (although it is not an enemy) and its disembodied eye is suspended above it, presumably as it's being acquired for use in the Eye of Helios. The area is protected by Tassitron Soldiers, the only place in the game where they can be found. The H-Source is found in this area after dispatching all the troops. The area also contains an exit-only Fast Travel station. 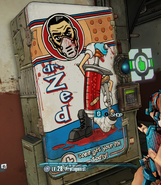 Borderlands 1.
Add a photo to this gallery 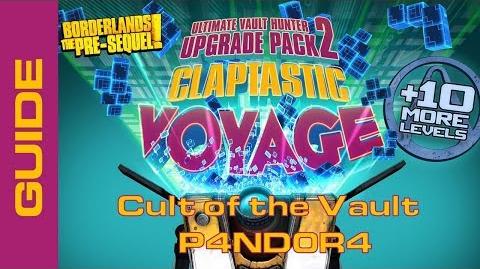 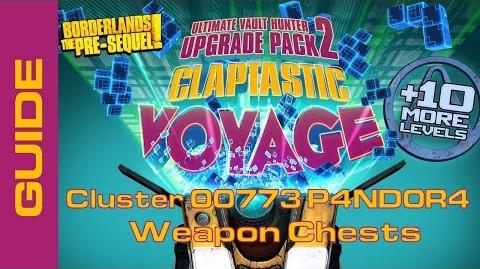