Story Mission
Cleaning Up the Berg is a story mission in Borderlands 2 given by Claptrap. The mission is performed in Southern Shelf.

"You've found Claptrap's eye, but he still needs someone to plug it into the socket. That someone happens to be one Sir Hammerlock who currently resides in the town of Liar's Berg. Claptrap wants you to head there now."

Liar's Berg has been overrun by bandits, and these intruders must be cleaned out of the area, but first there are several small bullymongs in the way. They will try to close the distance with any attacker to strike at point blank range, and if attacked from the top of the cliff they will leap up to retaliate. The bullymongs pose little threat at a distance however.

The bandits are relatively weak targets and fight with small arms from among the sparse buildings of Liars Berg. When approached however, a new complication arises when some more bullymongs arrive and attack the bandits and Vault Hunters alike. They can be played off against each other simply by hanging back out from the action, and this makes it an easy matter to whittle down both group evenly by attacking the winning side.

With the enemies out of the way, Sir Hammerlock emerges and attends to Claptrap.

"Claptrap can finally see! Now, it's time to get to Sanctuary. Unfortunately, one man stands between you and the last free city on Pandora. His name: Captain Flynt."

Main article: Cleaning Up the Berg/Transcript 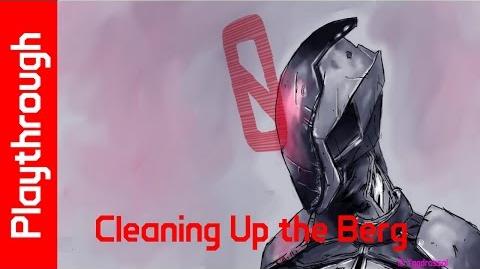 Cleaning Up the Berg
Retrieved from "https://borderlands.fandom.com/wiki/Cleaning_Up_the_Berg?oldid=432420"
Community content is available under CC-BY-SA unless otherwise noted.