Clark the Combusted Cryptkeeper is a secret boss in the Headhunter Pack DLC T.K. Baha's Bloody Harvest for Borderlands 2. He will spawn when four special tasks are completed after completion of the mission The Bloody Harvest.

In the Necropolis area of Hallowed Hollow are four large tombs, each with an unlit torch on its top. To summon Clark, these torches must all be lit. This is done by completing the task connected to each tomb, the nature of which is hinted at by an object near of the tombs. Clark will only summon after completion of The Bloody Harvest and if each task is completed in a single visit to Hallowed Hollow.

The four tasks are:

Once these tasks are completed, the four torches atop the tombs will ignite. Upon returning to the Necropolis, Clark will summon directly across from the four tombs.

Clark is a huge flaming skeleton. He is highly resistant to incendiary damage, but is not particularly strong or difficult to defeat.

To summon him again the Hallowed Hollow area must be exited and the four tasks must be completed again, making Clark particularly tedious to farm if one wishes to do so. 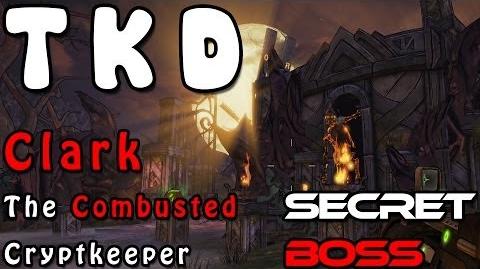