After talking to the Claptrap and accepting a mission to repair them, they can then be restored with a Repair Kit. Once repaired, the Claptrap will then offer a reward of a Backpack SDU (Storage Deck Upgrade).

Some of the Claptraps will also lead the way to otherwise inaccessible weapon chests once they are repaired.

There are a total of ten broken Claptraps in the original release of Borderlands and additional Claptraps to be rescued in The Zombie Island of Dr. Ned, The Secret Armory of General Knoxx and Claptrap's New Robot Revolution (downloadable expansions). This article is meant to help those who cannot find all thirteen.

During the second playthrough, the first five rescue missions and the DLCs (Safe House, Lost Cave, New Haven, Tetanus Warren, Scrapyard, Lumber Yard, Tartarus Station) award either a Backpack SDU or a Grenade Mod. The Lockdown Palace has a chance to reward an SDU on playthrough one, but has not yet been confirmed on playthrough 2 (see the SDU page). The closer a character is to a full inventory, the more likely it is to get a Backpack SDU as a reward. The chance of gaining an SDU has been found to be highest if the character has a full inventory, and decreases when there are empty storage slots when the mission reward is accepted. Additionally, there appears to be an even greater chance if the player turns in the mission with an overloaded inventory (i.e. turning in missions which dispense items as mission rewards when the character's inventory is already full).

If the mission reward is not a Backpack SDU, players can Ctrl + Alt + Delete and end the game, without saving or hitting a save station. Alternatively, simply close the game window in windowed mode (Alt + Enter to toggle windowed mode) or just press Alt+F4. Upon restarting Borderlands, head back to the Claptrap and hand the mission in for another chance at obtaining the SDU reward.

Alternatively the game can be exited just before handing in the mission, followed by backing up the save file. The mission is then handed in when the game is restarted. If the SDU is not offered, the game is exited, the backup restored, and the mission handed in again. This is repeated until the SDU reward results.

The game can also be saved just before the repair kit is turned in. Alt-Tab and find the saved game file and mark it "read only" (instructions below). Then return to the game, turn in the mission, and if the SDU is not rewarded, exit the game. It will say, "All progress will be saved", but in fact it won't, since the save file is read only. Load the game and try again. Once the SDU is acquired, the "read only" status of the save file needs to be reverted to allow the game to save further progress.

Saved game files should by default be under My Documents > My Games > Borderlands > SaveData. There may be several save files, but the save file that has been most recently modified should be for the character most recently played. To mark it "read-only', right-click the save file, select properties, and check the box marked "read only". 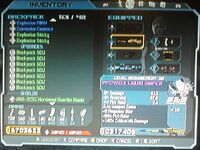 For console users, save the game when the tool box is acquired, then go to the Claptrap. If a grenade mod is rewarded, unequip the character's shield and drop a grenade. When the character is dying, push the button to respawn. When in the vortex, push "Start" and quit the game: A message will display that the game can't save at this point, so it can be quit safely. Repeat the action until the SDU is rewarded.

Alternatively the player can get the repair kit, hit a save point, then turn in mission, if upon completion the player does not receive the SDU they can just hit the "Xbox Guide" button and sign out. Upon signing out the game returns to the "Press Start" screen and players can retry turning in the mission.

An option for Xbox 360 gamers is to press the "Xbox Guide" button, and then hit 'Y' to return to the Dashboard. This will quit the game without saving.

It is possible to acquire but not use the SDUs as they are dispensed for the duration of Playthrough 2; not only do they get easier to receive due to overloaded inventory, but it also appears that unused SDUs do not count against potential rewards.