"You've discovered another defunct Claptrap robot. Could there be an unused repair kit somewhere out in this desolate place?" 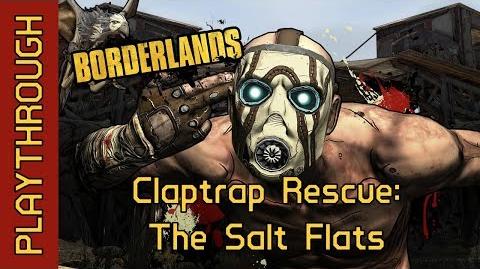 Find the repair kit and return to the Claptrap robot.

The Claptrap can be found inside Baron Flynt's bandit camp at the base of the bucket-wheel excavator located in the middle of this zone. From the east entrance it can be found by turning right and heading north, following the wall past the large fuel tank. The Claptrap lies next to a circular hut. The first image shows the map location for the Claptrap, while the second shows the in-game area.

The Repair Kit is back to the south past the vendors and past a dead tree with some barricades. Here there is another barricade, and jumping over this leads to a pile of debris. Under the mattress is the repair kit. The third image shows the map location of the repair kit, while the fourth shows the in-game area.

Returning the repair kit to the Claptrap ends the mission and rewards a Backpack SDU. The Claptrap also leads the way to a hidden weapons chest inside the circular hut right behind him.

"It was horrible! I don't know what happened, exactly, but I was caught in the crossfire! You definitely want to have the best possible gear if you're going to venture into this battleground. Here, you might find this useful."