Power To The People

"You've discovered another defunct Claptrap robot. Could there be an unused repair kit somewhere in here?" 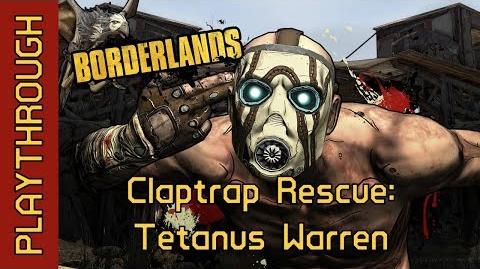 The required Repair Kit can be found further along in the tunnels of Tetanus Warren. From the Claptrap, follow the north west passage to the location indicated on the third image. Upon arriving at the platform on the right which has a table and chairs, a large metal structure can be seen curving up just beyond it. The repair kit is on a ledge there.

Once at this location, there is a bit of jumping to do in order to obtain the Repair Kit. As shown in the directions in the remaining four images, there are some metal scraps lead up to the roof of a shack. Walk out onto the canopy and jump to the roof of the adjacent dome-shaped hut. Walk out onto the canopy of this hut and jump to a platform made of a piece of metal scrap. From this platform, collect the Repair Kit.

An alternative that may be easier is to stand at the end of the platform just underneath and short of where the repair kit is. Look up towards the repair kit and jump. The icon for the repair kit should be visible. If the stats menu is not visible, move up a little and jump again until it is, then jump up and press the pick up key to fetch the kit. This method of getting items which are high out of reach can be used in several places in the game.

Return to the Claptrap to receive the Backpack SDU. This Claptrap does nothing special once repaired.

"Thank you kindly, stranger! The trash collapsed and I fell into this cave. Thanks to you, I think I can find my way back home now. Here's a little something to express my gratitude."