Claptrap Rescue: Scrapyard is an optional mission from the Claptrap Rescue series in Borderlands. It becomes available only after Get Off My Lawn! and runs in the Crazy Earl's Scrapyard location.

"You've discovered another defunct Claptrap robot. Could there be an unused repair kit somewhere in this scrap heap?" 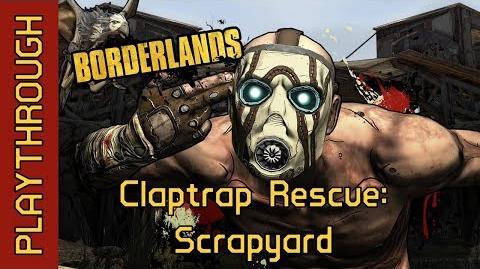 This Claptrap can be easily missed seeing as there are no other missions that send adventurers up this branch of Earl's Scrapyard. There is a fork in the road a short distance beyond Earl's home, and the Claptrap is beyond the left turn to the north-east.

The Repair Kit is very easy to locate as well, as it is located on a ledge overlooking the area that the Claptrap is in. While the intuitive path is to head all the way around the circuit to reach it, there is a much faster method of retrieving the Repair Kit. There are several objects in the junk pile below the kit that can be used as stepping stones to jump up onto the raised area where the Repair Kit lies.

"Thank you, kind stranger! Now that I am repaired, I can go about my usual duties with aplomb and enthusiasm! Please take this as a token of my gratitude!"